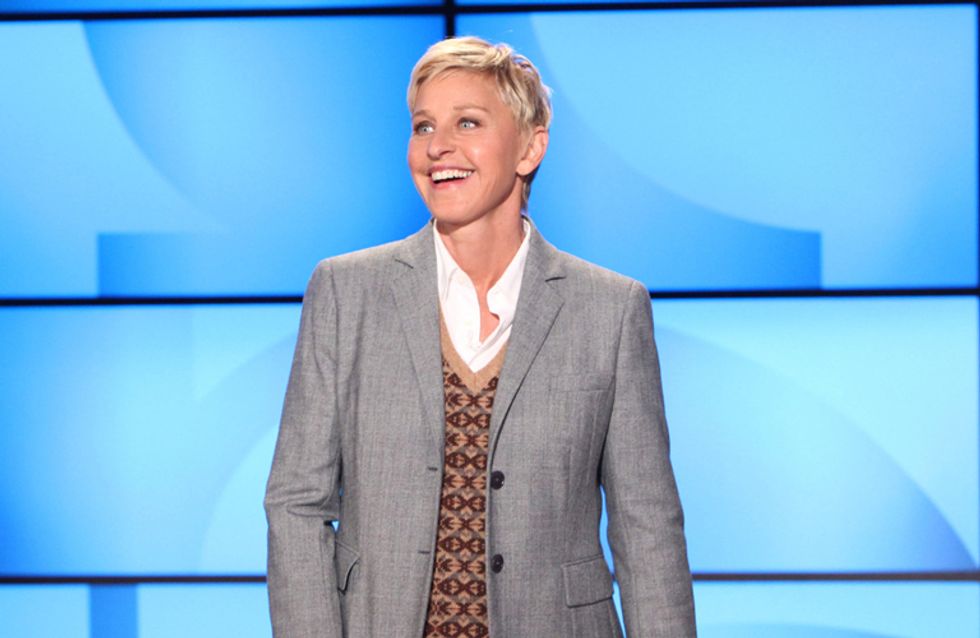 Ellen Degeneres loves surprising regular Joes and Janes with money, vacations, and kind words. This past February she changed the life of a formerly homeless man, Derrick Walton, who closes his pizza shop once a week to feed men and women in need. Walton received $10K (£6,000) from Ellen and recently told the veteran host that the money is being put to good use. Check out Ellen's most tearjerking surprises!

Ellen pays it forward to a kind waitress

Selfless Ruby Tuesday server and single mom paid for the meal of two U.S. National Guard soldiers who were in the midst of a furlough when the government shut down last year. On top of paying Sarah back for the $30 meal, Ellen also gave her a 50-inch television and a check for $10,000! We hope Sarah took a needed vacation with her son.

Engaged couple, Pete DiMartino and Rebekah Gregory, suffered horrible leg injuries and burns at the Boston Marathon bombing last April. After telling Ellen about what they've endured, Ellen gifted them a $10,000 check to help with medical costs and ANOTHER $10,000 for their upcoming wedding. We're sure she got an invite to their nuptials!

A new car for a deserving mother

Jackie was bedridden from a cold when she caught her ex-fiance cheating on her IN THE NEXT ROOM. What a scumbag (and we're glad she dropped that man-child). Now single, working 50 hours a week, and raising her 2-year-old daughter, Ellen decided to show this mom that not everyone is as heartless as her deadbeat ex and surprised her with a new Subaru to replace Jackie's broken car!

13-year-old Talia Castellano had never known life without cancer. She chronicled her painful journey through her YouTube Channel "TaliaJoy18." She loved make-up so much that CoverGirl made her an inspiring honorary spokesmodel. On Ellen Talia received a bunch of make-up and a vanity, but the real surprise is the check for $20,000! Sadly Talia died on July 6, 2013, but her empowering words can still be heard in her YouTube videos.

Katie Burns, a huge fan of Ellen Degeneres, wanted a family portrait with her three kids. Ellen paid for her JCPenny portrait and a 10 minute shopping spree at the big box store where Katie could pick out ANYTHING she wanted. She snagged four carts of clothes and toys for her kids! Later on the show, the already grateful mother broke down in tears when Ellen gave her a check for $10,000!

South New Jersey couple, Megan and John's, new home was left with severe water damage after Hurricane Sandy in 2012. Despite the destruction, the couple selflessly helped rescue others while the storm was raging. Unbeknownst to them, Megan's sister enlisted the help of Ellen to build a completely new house for the appreciative Meg and John!

Divorceé Robin was excited just to sit in the audience on Ellen, but she was amazed to be called up on stage to watch a video of her four adult kids praising their mother's positive attitude during a time of adversity. Ellen left the entire family in tears as she gave gift after gift to Robin, including a six-day vacation to Mexico!

Four-year-old Anthony Naylor showed off his killer dance moves on Ellen this summer and was simply grateful to have the support from the audience. Well, he was stunned when Cyrus Spencer from the show So You Think You Can Dance? came out on Ellen's stage to dance with him! Anthony hugged and high fived his idol while his proud parents looked on.

Justin Timberlake fans get to meet their fave hearthrob

Kristin and Emily were touring the Warner Bros. lot in CA where Ellen is filmed when they unexpectedly drove up on the Ellen set! They told Degeneres that they LOVE Justin Timberlake when he stepped out from backstage and met the two astonished women who later watched the singer perform on the show!

Military wife falls to her knees in surprise thanks to Ellen

This touching holiday episode featured Sarah who was struggling with the distance between her fiancé, Justin Jones, a solider serving in Afghanistan. She gets early wedding gifts from Ellen like a new TV and computer, but the best surrprise is when Justin walks out with a bunch of flowers. Sarah can barely control herself when she sees her devoted fiancé walk out from backstage. Very touching. You better grab those tissues for this one!

When has Ellen's surprises left you in tears? Tweet us @sofeminineUK!