Rita Ora is one of the most in demand female pop stars, but she’s clearly been working too hard as the 22-year-old had to be rushed to hospital after collapsing during a photoshoot. The singer had to be put on a stretcher and taken to hospital by ambulance where she required further treatment. We hope she’s ok!

Onlookers saw the R.I.P. singer carried out of her makeup trailer and rushed away by ambulance for emergency treatment.

Dr David Farcy MD Chairman of the Emergency Department at Mount Sinai Hospital in Miami, told the MailOnline: “Rita Ora was treated for heat exhaustion and dehydration at our hospital today. She was discharged and is fine.”

Rita was spotted looking unwell shortly before collapsing, and it was clear that she was struggling in the 30 degree Celsius heat (90° fahrenheit),

Wearing a skintight dress and black high-heeled boots – which couldn’t have been too comfortable – the popstar was seen at times leaning on a taxi for support during the shoot.

The Shine Ya Light singer reportedly had to call a halt to proceedings so she could have a quick breather, which is when she fainted in her trailer.

Miami beach police officers and fire rescue appeared on the scene as crowds gathered, but after receiving medical treatment her in her trailer it was decided that Rita needed further medical attention.

Clearly the singer will be upset at the turn of events as she’s been excited at becoming the face of the fashion brand since the announcement in June.

Following in the footsteps of Kelly Osbourne, Taylor Momsen and Georgia May Jagger, Rita announced on Instagram: “Joining forces with Madonna and Lola! It's official Ritabots - I'm the new face of Material Girl!”

Madonna and her 16-year-old daughter Lourdes (otherwise known as Lola), were equally pleased to have the British popstar on board, commenting in a press statement: “Rita is a talented beauty but what really drew us to her is the confidence she oozes through her music and her unique sense of style.

“On stage or off, in photos or on the street - she's a magnet! This is what the Material Girl brand is all about!”

Rita – who is currently dating Scottish DJ Calvin Harris – was said to be thrilled to get the opportunity, hoping it will raise her profile in the US.

She was apparently put forward for the job by Lola, who co-designs the collection with her mother, after the teen became a fan of her music.

A source told The Sun earlier this year: '”Lourdes has been a fan of Rita for a while and has been to many of her gigs. She persuaded her mum to see her.”

“Rita jumped at the chance because she's such a fan of the Queen of Pop.”

We hope Rita gets some much-needed rest and feels better soon.

Are you a fan of the Material Girl range? Tweet us @SofeminineUK. 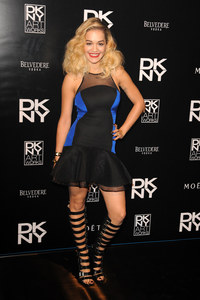