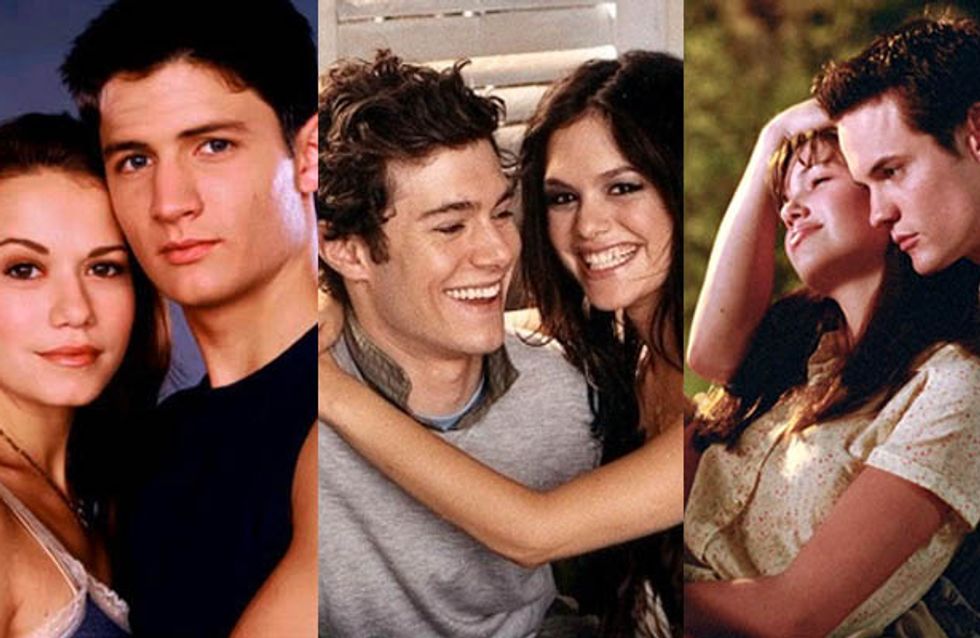 The world seemed more romantic back in the nineties and the early noughties. Seth and Summer were still going strong, Lucas couldn’t decide between Peyton and Brooke and Ross and Rachel couldn’t seem to get it together. What beautiful relationships do we have to get us through the day now? Kat and Alfie?! We’re less than impressed with this option. We think it’s probably better just to reminisce…

Sabrina the Teenage Witch was just amazing, mostly because of Harvey and Sabrina’s relationship that just kept us guessing. Will he find out she’s a witch? Will he accept her for who she is? (Yes and no). Harvey dumps Sabrina when he finds out she's a witch, but he comes round eventually!

In Gossip Girl Chuck had some serious issues and only the spoiled yet generally awesome Blair could bring him out of himself. And we absolutely loved it. It was like Pride and Prejudice but in New York. In modern times. With extremely rich people.

From the moment that Noah climbed on that Ferris Wheel in The Notebook so Allie would agree to go out with him, we knew this was one couple we weren’t letting go of anytime soon!

In the Gilmore Girls we were introduced to the lovely Jensen Padalecki (Sam from Supernatural) before he got crazy buff and grew shoulder length hair! He and Rory were so SO sweet, then she went and ruined it by falling for the bad boy Jess (oh HEY Milo Ventimiglia AKA Peter Petrelli from Heroes). To be fair, who can blame the girl.

The Office gave us Dawn and Tim, the office workers who spent most of their time winding up the nerdy Gareth and rolling their eyes at their boss, David Brent. These two were so sweet but with one problem – Dawn had a (horrible) fiancé. Well, until the Christmas Special anyway, then cue Dawn’s AMAZING entrance to kiss Tim.

This High School Musical couple were typical of over-the-top Disney, but the High School Romeo and Juliet story of two people who JUST WANT TO SING TOGETHER FOR GODS SAKE made this relationship one of our favourites. Also, Zefron. The guy is Zefron. No more explanation needed.

These guys. In 13 Going On 30 Jenna and Matt were bezzies, but when Jenna gets catapulted into her thirties it turns out that she was awful to him ever since their childhood. But he’s so sweet and snuggly! Of course they eventually get together and live in a pink house. Of course.

Ryan and Marissa from The O.C. were simply perfection. They couldn’t have been more angsty with their car thefts, overdosing, fire starting ways, and we loved it. We think Marissa’s death was the moment all of us realised life wasn’t fair. Why would you do this to us The O.C.?!

We all though Joey would end up with Dawson (the show is called Dawson’s Creek after all), but no! It was the sarcastic, quick-witted Pacey that Joey ended up with, and we couldn’t have been happier.

Lucas and Peyton in One Tree Hill were ALWAYS going to end up together, but that didn’t stop us rooting for the handsome basketball player and the brooding cheerleader until the very end. Leyton 4eva.

Chad Michael Murray was probably the sexiest guy of the noughties, so obviously we watched every romcom he was in…multiple times…this includes the seminal classic A Cinderella Story, where he and Hilary Duff as Austen and Sam IM each other poetry (omg so modern and hip) and meet up in a school dance in masks but Sam drops her bejewelled phone (instead of a shoe? HIP.)

Clueless is such a classic, and in twenty years, the teenagers of the world will still be crushing on these two! They might be step siblings (shudder) but they have such BANTER.

Seth and Summer from The O.C. Hell Yes. These two were so amazing. Seth was a nerd (though obviously played by the unbelievably attractive Adam Brody) and Summer was like, soooo popular. But it just worked.

Nathan and Haley from One Tree Hill made us wish that we got married when we were 16, got pregnant at 18 and went into labour on our graduation day. Honestly these two made teenagers making stupid decisions look so glamorous!

When we first watched A Walk to Remember, we couldn’t believe how well we handled the deep and meaningful themes (even though we’re still not over the ending, which tore our hearts to shreds). As for Jamie and Landon, you can’t beat a good old tale of redemption where the guy protects the girls honour and builds her a telescope. This was a winner of a relationship.

We can’t believe we had to wait for the Lizzie McGuire Movie to finally witness Gordo and Lizzie get it together and the kiss lasted for all of ONE SECOND. Ah who cares, they’re still adorable!

Buffy and Angel have a brooding, complicated relationship in Buffy the Vampire Slayer. Yes he becomes an evil vampire when they have sex and yes she stabs him and pushes him into hell, but in spite of those things they do really like each other!

The Friends never ending storyline of Ross and Rachel. Ten seasons of the will-they-won’t-they with Ross and Rachel. We knew they’d get together in the series finale, and we couldn’t imagine a better way of doing it!

The Princess Diaries. Why couldn’t we have a distant relation who told us we were the heir of the Throne of Genovia? Why couldn’t we have a hot guy with floppy hair who plays in a band and likes us whether we’re royalty or not? Well, she does eventually end up with someone else in the sequel, but what are you going to do when Chris Pine comes calling?

We’re talking season one Gossip Girl Dan and Serena, before they both became terrible people. They were so cute back then!

The Doctor and Rose

This parting back in 2006 in Doctor Who absolutely destroyed us. The Doctor and Rose were the sweetest couple. And…and the Doctor didn’t have…time to say he loved her…IT’S MAKING US WELL UP JUST THINKING ABOUT IT. Watch the clip at your peril!

The Fresh Prince of Bel Air’s Will and Lisa were so funny and had no problem ripping into each other – Will definitely needed someone who was as sassy as him!

We basically watched these two’s entire relationship develop on Friends. We may as well have been a part of the relationship. Though that would have been weird. We didn’t quite know what to do with ourselves when Friends finished. It felt like a break up.

Sex and the City’s Big might have been a total idiot most of the time, but we loved him just as much as Carrie, especially when he jumped to her defence in Paris. Go get that Russian Big!