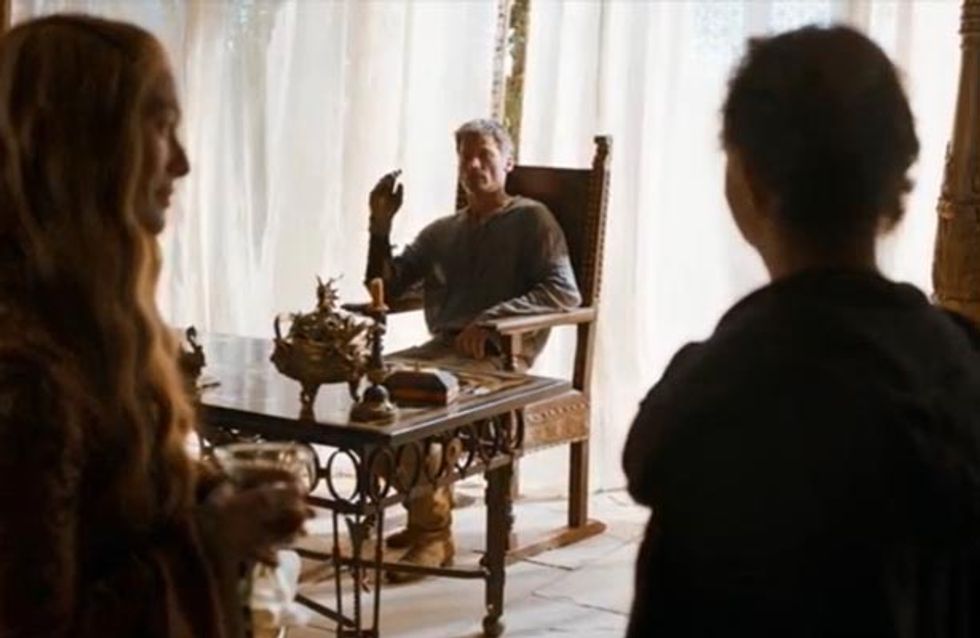 Game of Thrones has broken our hearts. It's promised revenge. It's shot the promise of revenge with crossbows. It's let the hated win, over and over again. It's scarred all the men who were once so darn attractive, and yet we keep coming back for more. Why? Because this show is like a drug. A miserable drug. We've summed up the first episode of season 4, so be careful! The article is dark and full of spoilers...

So Game of Thrones is starting again, and we are all like

Until we were met with THIS.

Is Tywin melting down Ned Stark’s sword, Ice? IS NOTHING SACRED TO YOU LANNISTERS?

Tywin’s doing another one of them metaphors. First he skins a deer, then he catches a fish, then he sets a wolf pelt on fire. We get the symbolism okay.

And cue the opening sequence! They’ve introduced the Dreadfort! This is the Bolton’s place where Theon lost his ‘favourite toy.’ Blergh, memories.

Jaime’s back in King's Landing! Aside from the lack of a hand, he looks like a Disney Prince once more!

Tywin wants him to go back and become Lord of Casterly Rock but Jaime’s determined to stay in the Kings Guard because of various reasons. These reasons involve incest, obvs!

Meanwhile, Tyrion and his crewage of Pod the rod and Bronn are waiting for the Martells to arrive for King Joffrey’s wedding. There’s some bad blood between the families (his sister was brutally raped and she and her two children were murdered, which was solicited by the Lannisters) so the fam sent Tyrion since he’s the most expendable in case the Martells feel like chopping off some heads. Standard Lannister BS.

It looks like Prince Oberyn Martell has already been in King’s Landing for a day, and Tyrion rightly guesses that quite enough time’s passed in the episode without nudity…and so Oberyn is probably in a brothel feeling up girls like he’s at a farmers market.

Turns out he’s right, but when Oberyn hears a couple of Lannisters singing Rains of Castamere, he takes time out of his busy shagging schedule to get a little stabby.

Fortunately Tyrion shows up, and the pair have a little chat about how Oberyn wants to kill everyone involved in his sister’s death, particularly The Mountain.

"Tell your father I am here. Tell him that Lannisters aren't the only ones who pay their debts."

Meanwhile, in God knows where, Dany’s dragons are starting to get a bit big and wild. They snap at her! Sad face.

Dany is off to conquer another city with her mega army, but it’s all starting to get a bit meh. Stop freeing slaves and start searching for Westeros tourist spots woman!

Back in King's Landing, Sansa is totally miserable and won’t even eat lemon cakes. For Gods sake, the girl loves lemon cakes. It is known.

She and her hubby discuss how her family were brutally murdered, and she says “I lie awake, staring at the canopy, thinking about how they died.” Now we know Sansa gets a bit of a bad rep for being a bit of a damp squid, but we think this is a fair enough reaction.

Jaime gets a golden hand and is already being sassy with it. Love.

INCEST ALERT! Oh, no, false alarm. Is anyone else vaguely disappointed? Is there something wrong with us? Why doesn’t Cersei want twin sexy time?!

She and her Wildling chums run into Thenns, which are their creepy looking allies who like to eat people.

This line: “One time before you die, you really ought to try crow.” Blergh.

Aaaaaand Jon Snow is on the screen. Finally. Argh, hey Jon Snow. Sorry about your bro. Let us comfort you.

He’s gotten into a wee bit of trouble for killing one of his Night Watch brothers and sexing up a Wildling though. Ugh, Janos Slynt (the one Tyrion sent from King’s Landing) is there! Lucky for us, what Aemon Targaryean says, goes. Jon Snow won’t be in for the chop just yet!

Ooo Margaery’s being bitchy about Joffers. Even the bushes have ears girl, watch yourself.

Fortunately Brienne interrupts, and Lady Olenna is utterly delighted at her size/outfit/hair…we’re not quite sure. Brienne promises Margaery that she will avenge Renly (remember Margaery was once married to him? Yeah, us neither), and Marge didn’t seem to care all that much, probably because he shagging her brother and all that.

King Joffrey and Jaime Lannister have a bit of father son bonding time. So nice to see the Kingslayer and his evil offspring in one room for a change.

Joffrey points out that Jaime is forty (revelation!) and hasn’t done much with his time on the Kingsguard. Now we know the truth about Jaime killing the King, we were very upset when we paused the show to read the book. #Nerds

Daario knows Daenerys wants it. Only a matter of time. Hang on, is the writer trying to distract us from Dany chilling in the desert when she should be sitting on the throne by throwing some romance into the mix?! NO, WE WON'T FALL FOR IT!

We thought that the Jaime and Brienne banter would be over. Happily, we were wrong! Their relationship is a rom com waiting to happen.

Sansa cheers up a little when she runs into Ser Dontos (remember him? The one she saved on Joffrey’s nameday when he tried to drown him with a barrel of wine?). Dontos gives her a pretty necklace and she gives him a smile. Just goes to show. Jewellery heals all wounds.

FINALLY we get some Arya action. We were getting worried. The youngest Stark girl is still stuck with The Hound but the pair are having so much banter. Arya is after the guy who took her sword and killed her friend Lommy, and The Hound helps out (after a chat about chickens).

The episode finishes with Arya quoting Lommy’s death back to Pollimer, before trotting away on a horse. She goes full Kill Bill. It’s amazing.

So a few questions for you all:

What did you think of the episode?

What do you think Brienne is going to do RE helping the Stark girls?

Would Sansa live in a lemon cake house if she could?