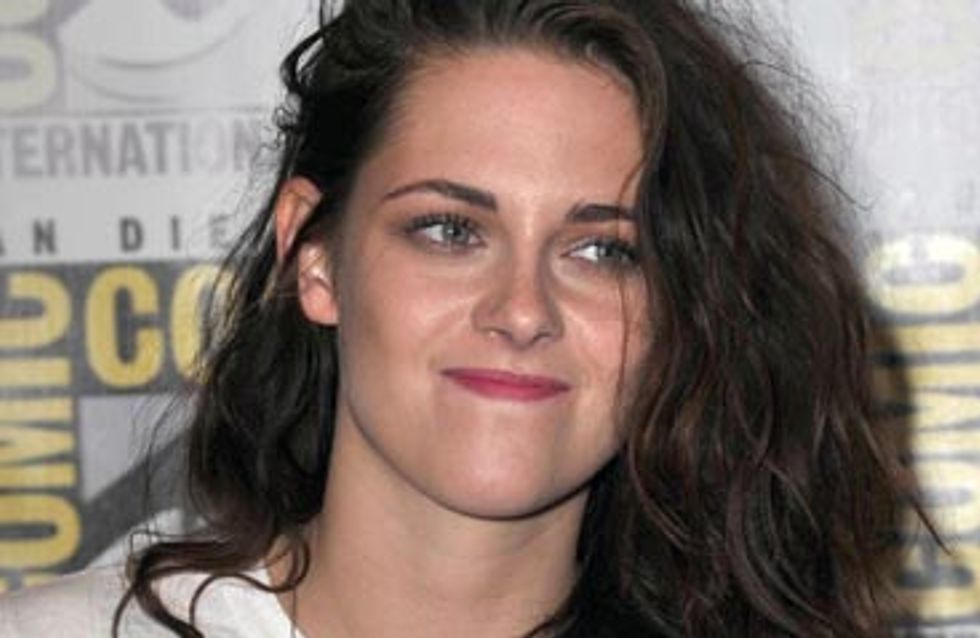 As a reluctant Hollywood star, fame has been thrust upon Kristen Stewart, and unfortunately this means that for her, all those awkward moments in life don't go unnoticed! Since it's Kristen Stewart's 24th birthday today, we have chronicled the top moments she's been really, really awkward at this whole fame thing. Many Happy Returns KStew!

1. She breaks her award

KStew is rather clumsy and obviously doesn’t like speaking in public, so mix it all together and of course she’ll drop her award and snap a piece of it off! This is probably what we’d do in this situation, fair play Kristen!

When you win MTV’s Best Kiss Award, you kiss. Okay? No arguments. Rachel McAdams and Ryan Gosling did it! That couple from Step Up 2 did it! Kristen! Why you no do it?!

3. When she speaks in pretty much in every single interview

Kristen Stewart has a habit of looking and sounding like she’s nervously reciting a class presentation in every interview. It’s not to say that she isn’t nice and friendly, but where’s the confident yet friendly ease we are so used to seeing from the Hollywood cream of the crop?!

4. Every time she mentions how much she doesn’t like fame *eye roll*

Kristen Stewart has said that she doesn’t enjoy her fame. She said she prefers to be with people who don’t care either, saying “I love being on the periphery with a group of people who have the same values as I do. People who don’t get off on fame.”

She said this in an interview for Vogue, the cover of which she graces. Yeah.

5. When she got caught cheating

If you’re going to cheat on the hottest guy on the planet and you’re constantly followed by paparazzi, don’t have an affair on the terrace! It's just awkward for you, for Rob, for everyone. We were all angry at first, and then we read her statement, which said:

"I'm deeply sorry for the hurt and embarrassment I've caused…this momentary indiscretion has jeopardized the most important thing in my life, the person I love and respect the most, Rob. I love him, I love him, I'm so sorry."

After that, we just felt a little awkward.

6. When she tries to tell anecdotes

Kristen, better leave the anecdotes at home. Or make them funnier.

7. When she talks about how much she loves acting

Kristen Stewart once said that acting feels like breathing to her. Cue a quick mash up of how she is the same in every. Single. Film.

8. When she uses her hair as a prop

This girl doesn’t a PERFECT impression of KStew. It’s hair woman, not a lifeline!

9. When she didn’t quite nail the whole posing on the red carpet thing

We’re guessing that if we were on the red carpet we’d just sort of stand there with our hand on her hip and grin (or pout). Kristen Stewart doesn’t play by them rules.

10. When she lost it with the paps

We know that the paparazzi are just horrendously awful, and we totally respect that Kristen Stewart wants to lay into them rather than just head straight for her car Kim Kardashian style, but hiding behind a gate next to some bins? Oh Kristen.

Do you *sigh* want to *play with hair* wish Kristen an awkward Happy Birthday? Tweet us @sofeminineUK