Harry Styles may be one of the most famous pop stars in the world, but as far as brains go he has nothing on his sister! Taking the lead as the smartest Styles at her graduation ceremony yesterday, Harry was in attendance as his sister Gemma picked up her university degree. The 19-year-old singer, who has always been close to his sister, proudly watched in the audience with their mum Anne. Aww!

Usually it would be Gemma Styles who is sat dutifully in the audience cheering for her brother, One Direction’s very own Harry Styles.

However yesterday the tables turned for the Styles sibling as this time it was Harry who was sat in the audience cheering on Gemma as she picked up her degree from Sheffield Hallam.

The 22-year-old, who is reportedly very close to her brother, received her grades in July, with Harry tweeting his congratulations.

Sounding like a typical little brother, the 1D star wrote: “Well done to my annoyingly clever sister @GemmaAnneStyles on completing her education! I’m so proud of you. Xx”

It was a great day for the Styles family as Anne and Harry watched from the audience as Gemma received her first class honours degree in Science Education with QTS at Sheffield City Hall.

Wanting to mark this special family moment, Harry posed for official photographers alongside his beaming sister.

We’re pretty sure that the professional photographers don’t let you take snaps alongside their own, but for One Direction it seems like they were willing to make an exception!

“Congratulations to @GemmaAnneStyles on her degree and a warm Sheffield welcome to her brother @Harry_Styles too.”

“@GemmaAnneStyles a massive congratulations on your degree! Hope you have a wonderful day with your family.”

Flipping heck! We would like to know if any other graduates received three tweets from Sheffield Hallam. We’re guessing not!

Harry posted a sweet snap with his sister on Instagram with the caption: “My sister graduated today. She’s all clever and that.”

Naw! We wonder why none of the boys from 1D gone to Uni. Do you think Simon Cowell put a blanket ban on them furthering their education? 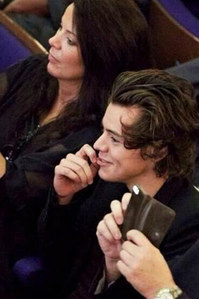