Harry Styles’ life is becoming increasingly like a bad teen movie about a young British pop star who has to choose between his one true love and his best friends (aka the One Direction boys). Basically it sounds like his blossoming relationship with Kendall Jenner has been clashing with his chilled out London lifestyle – probably because Kendall is in a reality TV show where she shares her entire personal life for profit and fame. Just saying.

It is a truth universally acknowledged that Harry Styles is the most famous member of One Direction and with his tattoos, his long locks and his assortment of headbands, he is also arguably the coolest.

But it looks like his status as the edgiest member of the group is being called into question as his relationship with the fame-loving Kendall Jenner becomes more serious.

An insider revealed to Heat magazine: “Harry was formally introduced to the entire Kardashian clan last week at a lavish eight-course dinner cooked by a private chef at Kris [Jenner’s] mansion. 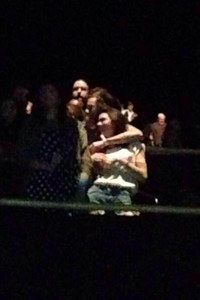 “He’s smitten with Kendall and said he can’t wait to bring her back to the UK to meet his mum and sister, but he also feels very torn between his London friends and her life in LA.”

The curly haired popstar has recently been seen in the company of his British gal pals Pixie Geldof and Alexa Chung, who apparently: “were teasing him about becoming the next Kardashian and warned him not to become hen-pecked.”

It sounds like even his mentor Simon Cowell has been joining in on the fun, and has joked that Harry is an honorary Kardashian. According to the source: “Harry’s been laughing it off, but he’s worried that his reputation as the ‘cool one’ in One Direction may be affected.” Of course it will. You can't date a Kardashian and get away with your dignity intact, just ask Kanye!

Harry’s cousin Ben Selley agrees that Harry is certainly concerned at how different his lifestyles are, and told the magazine: “It’s difficult because he’s had to adjust to both lifestyles really quickly.”

Although Hazza has recently been spotted checking out properties in LA, Ben promises that Harry would never make a permanent move because of his mum, Anne. He continued: “I don’t think it would be in his interests to move there full time. Anyway, Harry loves living in London because it’s more quiet and peaceful.”

Whilst Harry has been balancing his two worlds, it looks like the other 1D boys have disappeared off the face of the earth before they will inevitably be back in our lives (and in our hearts) when their Where We Are tour kicks off in April. Using Twitter has a homing device, it looks like Louis Tomlinson has been spending his free time watching Celebrity Big Brother and eating fish finger sandwiches at his girlfriend Eleanor Calder’s uni digs, and will be playing semi-pro football for Doncaster Rovers.

Liam Payne got himself in a bit of trouble for posing on a roof ledge, and since apologising has been barely heard from. We can only assume he is taking the break he needs! Niall Horen has spent the break recovering from a knee operation, whilst Zayn Malik went to Disneyland with his fiancé Perrie Edwards, but since then has been hardly seen or heard from.

Ah well, not everyone can go out with a Kardashian!