Harry Styles takes girl for a date at McDonalds

by Emmy Griffiths Published on 25 October 2013
© Getty and Instagram

Look away now 1D fans! Harry Styles have been snapped taking Australian blogger Sjana Earp on a date to McDonalds. Apparently fast food is the best way to a girl’s heart, as Sjana appeared delighted by the dinner, blogging enthusiastically about her encounter with the One Direction star and how much she enjoyed herself. However she's denied that they will be a couple any time soon. Maybe the chicken nuggets just didn't cut it!

Harry Styles has no qualms taking a girl out for a Big Mac, as it appears he took out Australian blogger Sjana Earp out for a McDonalds whilst in Australia for One Direction’s Take Me Home world tour.

Sjana wrote about the event on her blog, saying: “Harry is probably the NICEST person I’ve ever come across. And it’s genuine, which is such an incredible thing to possess these days.”

“He just has this effect on people. You feel really chilled, friendly and relaxed around him.”

Although many may consider a Maccy D’s as a cheap move from everyone’s favourite curly-haired singer, Sjana also posted a photo of a backstage pass for the 1D concern on Instagram, which is considerably more impressive. Nice move Harry!

This isn’t the first time Harry has thought about treating a girl to some fast food either. When dating Caroline Flack, he said:

“If she asked me, I’d love to take her out. How about McDonalds?”

However Sjana soon shot down speculation that the two were romantically involved by taking to Twitter to set things straight.

The Aussie girl wrote to UnrealityTV: “I'm not a model, my twitter is not @sjanaelise that is a fake, you misquoted me on several occasions and i'm not dating Harry x.”

@unrealitytv i'm not a model, my twitter is not @sjanaelise that is a fake, you misquoted me on several occasions and i'm not dating Harry x

She also wrote on her blog: “For privacy reasons, it is my choice not to talk about it and give details and it is no concern to others J people are people afterall.

“So yes, I spent some time with Harry throughout the weekend, and no I don’t desire to elaborate further and I’d appreciate if everyone could respect that.”

However, Sjana did reveal that Hazza tracked her down before the boys even landed Down Under, telling one fan “he contacted me before they even got to Aus.”

What do you be happy with Harry taking you for a date at McDonalds? Tweet us @SofeminineUK! 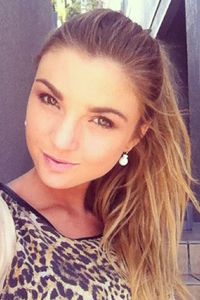