Heidi Klum always goes all out on Halloween. The supermodel – who clearly loves dressing-up – looked unrecognisable at her annual Halloween bash as she got fully decked out as an elderly wrinkled woman. We have to admit it’s not the hottest look the Project Runway host has ever sported, but for an old person she wasn’t too bad looking!

The Project Runway host dressed up as an elderly person – which is rather ironic considering that all A-listers are obsessed with looking and staying young.

From her behind-the-scenes Instagram pics you can tell it was a lengthy process to transform Heidi’s entire body and give her a hunched spine.

The team – including make-up maestros Bill Corso and Mike Marino – covered the mother-of-four in wrinkles, liver spots and blue varicose veins, using airbrushing machines and a whole host of other materials.

She even rolled up to her party in a vintage Rolls-Royce Phantom and stepped out with a cane – much to the delight of fans assembled outside.

Earlier this month Heidi told Parade.com: “I'd rather stay home than go out in an uninspired costume.”

She added: “I start thinking of ideas months before Halloween, and I have an amazing team who makes the impossible possible. I don't really have a system for picking my costume each year, they kind of just come to me. It's definitely not a last-minute decision. It takes months of preparation.”

Every year the 40-year-old goes all out on Halloween, previously dressing up as Egyptian Pharaoh Cleopatra, a skinless woman, the Hindu goddess Kali and an ape.

The statuesque beauty also expects the same dedication from her A-list partygoers, revealing: “I want people to strive to have a better costume than me. I want my guests to really wow me!”

But the other celebrities in attendance didn’t have a hope of topping Heidi’s!

What do you think of her costume? Tweet us @SofeminineUK. 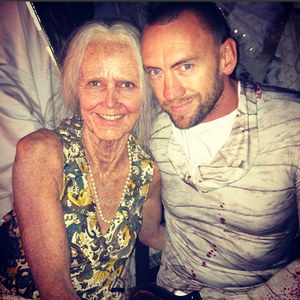 Heidi Klum and Seal spotted kissing: Are they back together?

by the editorial team
+
All the news about Heidi Klum