Hilarious First Kiss Parodies: The Funniest And The Freakiest Spoofs 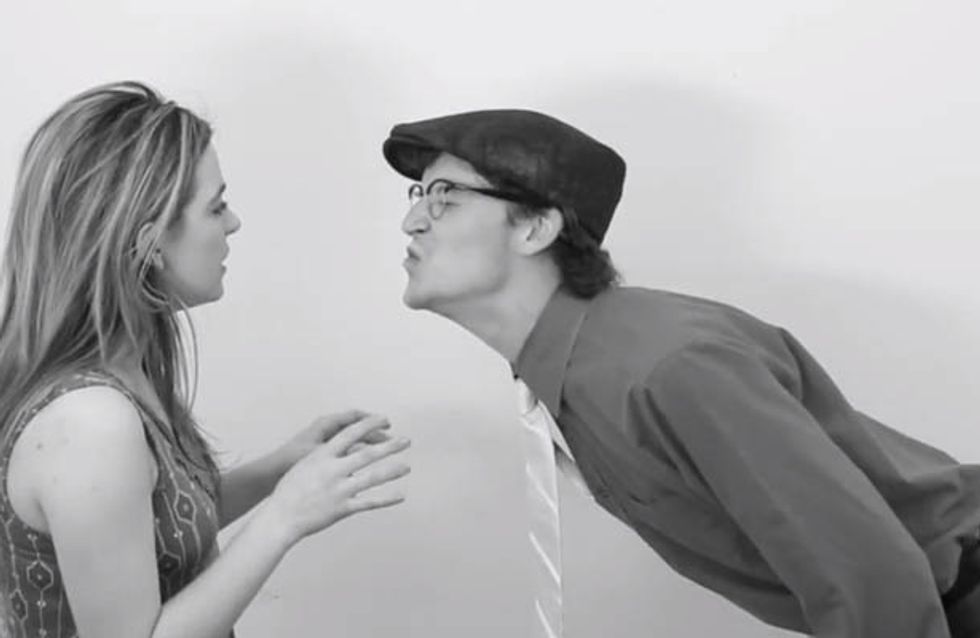 Wren studio recently released a film that asked 20 strangers to stand in a studio and kiss each other for the first time. The video amassed over 46 million views in four days (FOUR DAYS!), and since the Internet is a ironic monster, naturally some amazing parody videos have sprung up. Take a look at our favourites!

If you haven’t already seen it, twenty people met and kissed for the first time, and the result is really sweet, even if it is thought that the people involved were actually models. All of their clothing is now available for sale on the Wren site, which might be a little hint that they're not entirely legit!

This couple had their first kiss, which blossomed into more. Now they’re moving in together and life is like a beautiful Taylor Swift song – but unfortunately living quarters introducing couples to less-than-attractive aspects of each other.

Twenty individuals were asked to fist bump for the first time. The result was something beautiful. Can sensual fist bumping become a thing?

Two guys in black and white filter basically scream at each other. It captures human emotion perfectly...

Of course someone had to do this video! Why does it always end this way?!

The Internet couldn’t reasonably take the p*** out of a video without a little more help from the animal kingdom. These guys weren't ready for full on Frenchies, so they just made do with sniffing.

Let yourself be at your most intimate with a stranger. Translation: fart in front of them. Ugh.

Can we turn the lights down? It’s scarier than we thought! Let’s just take a moment to look at each other…as we eat this delicious SNOG frozen yoghurt! Yum yum buy our product.

A bunch of girls are asked to give one loser (who is obviously a hot ass guy in glasses) his first kiss. Results include nose licking, sneezing and throwing up.

One smug filmmaker decided since the original film was probably fake, he’d actually capture people’s actual kisses. The result was largely similar to the original video. People are a little shy, then totally go for it.

Kiss on the cheek
by the editorial team