What We Learned From Game of Thrones Season 5 Episode 2: The House of Black and White

by Emmy Griffiths Published on 20 April 2015 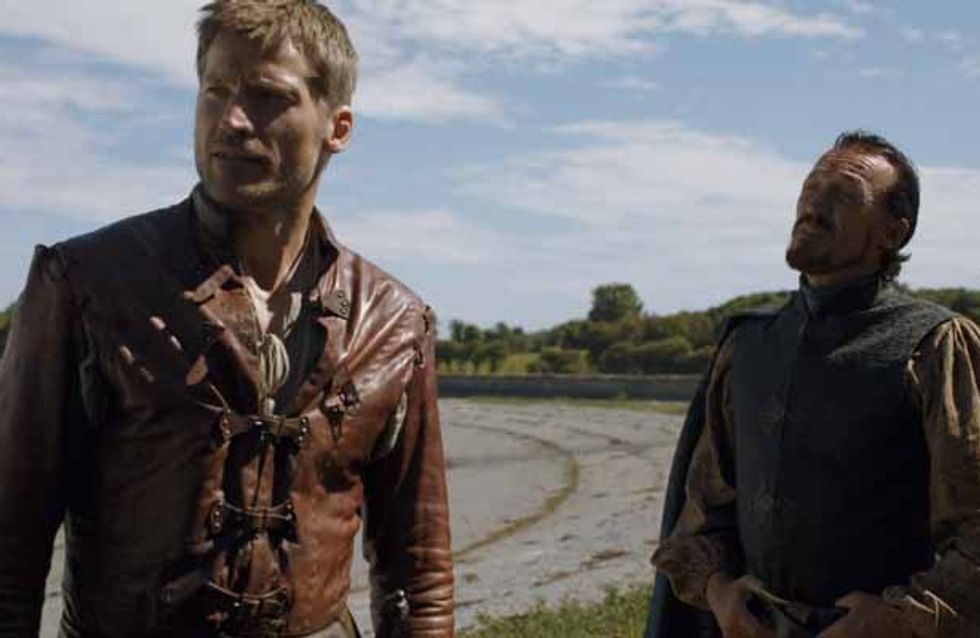 It happens in every season of GoT: there is always that one episode that is a little slow, is chock-full of dialogue with little action and we all walk away feeling well, just a little underwhelmed. These are the episodes that we, as fans, should appreciate just as much as the episodes that have glorious fight scenes, brilliant character banter and extremely satisfying villain deaths, because these episodes pave the way to the ones we like to film ourselves reacting to. Here's what we thought...

Arya crosses the Narrow Sea, sits outside the mysterious House of Black and White and is FINALLY allowed access by an old man who turns into Jaqen H'ghar. JAQEN F*CKING H'GHAR! Keep it together everyone, Game of Thrones’ hottest assassin is back, highlighted hair and all, and we couldn’t be happier.

Brienne, Pod, Littlefinger and Sansa all wind up in the same pub, and Sansa is SUCH a cow. We gained so much respect for her since season one that her cold refusal to speak to Brienne feeling a little bereft inside. Sansa, go back to ginger because you’re a real diva when you’re brunette.

Although in Sansa’s defence, what the hell is Brienne doing with her life choices? She’s determined to keep the Stark girls safe, but what is her ACTUAL game plan? And why is she going round telling everyone she saw a Stannis Baratheon shadow kill Renly? I wouldn’t believe her either tbf.

OMG Jaime how long until you stop trying to impress your biatch of a sister-lover?! You gave up any chance of legit children and your right to head the most powerful family in Westeros so you could be with her in the Capitol. You pushed a tiny Bran out of the window to keep your secret. You got your hand chopped off and met a inordinately better woman on the way back to her, and she STILL DOESN’T CARE.

Now Jaime is on a highly dubious quest to Dorne to retrieve their daughter Myrcella, and we don’t know if it’s because of the one hand or because GoT takes away the people we love the most, but we can imagine it’s going to go well.

On the plus side, at least he’s bringing Bronn with him after his betrothal to the dim-witted Lollis didn’t go quite as planned. Braime is already our favourite thing this season.

Prince Doran is the only chill guy in Dorne

Is Oberyn and his mistress Ellaria are anything to go on, the Dornish are a passionate, and often angry people. So naturally Ellaria and ‘the Sand Snakes’ wish to avenge Oberyn by chopping off Myrcella’s fingers and starting a war with the Lannisters whilst Doran just wants to mourn his brother and chill the F out in the Water Gardens ffs. But from the look on his face as Ellaria marches out, he knows as well as we do that this shit is not over. Maybe it wasn’t such a bad idea that Jaime gets his daughter out.

Cersei is losing her grip, and it’s brilliant

Cersei is basically ruling as the King’s Hand and is loving life before her Uncle Kevan puts a stop to it. Best line to throw Cersei off her smug little pedestal has to be: “I do not recognise your authority to dictate what is and what is not my concern. You are the Queen Mother. Nothing more.” BURN. #TEAMKEVAN

Shireen’s mother is the literal worst

Stannis’s daughter Shireen is adorable, and teaching Gilly to read. There’s a lot of talk of the horrors of the usually fatal grey scale, which affected Shireen has a baby but she was cured, leaving her with a terrible facial scar. We have a feeling that this isn’t going to be the last we hear of this nasty little problem, but since Queen BITCH showed up and ruined the party we didn’t get to hear the end of Gilly’s story. Seriously hate that woman.

Jon Stark has a nice ring to it, but no

Jon Snow is such a man on honour. Stannis respects it, the Night’s Watch respects it, hell, even the White Walkers probably respect it. So when Stannis offers to legitimise him and give him Winterfell, we always knew he was going to say no but OMG THE TEMPTATION.

Luckily for us Samwell Tarly was there to give us the next best thing: nominating Jon for the 998th Lord Commander of the Night’s Watch. God, watching him beat Alliser Thorne whilst ripping into Janos Slynt was SO satisfying. On this one occasion the good guys won, so enjoy it everyone because it’s not going to happen again any time soon!

Daenerys children are going off her

Not such a nice Mhysa now is she?! After one of her freed slaves kills a captured Son of the Harpy who Dany planned to give a fair trial to, he broke the law in Dany’s eyes, but not in the eyes of the freed slaves who saw it as justice. So chopping the head off the (kind of hot) slave had them all hissing like snakes, and we don’t blame Dany for hating every second. Don’t hiss at your Khaleesi guys, come on!

Dany was at her true low point before she sees Drogon, who is now HUMONGOUS and looks like the scariest bloody pet we’ve ever seen, but Dany loves that little dragon like it’s a tiny tot. With scales.

How much did Pod want that barmaid? #Justsayin #PodtheRod

Is Bronn’s conversation with Lollas a little foreshadowing? : “You know what I think? I think you’re a good person. And your sister is a mean person. I been all over the world and if there’s one thing I’ve learned, meanness comes around.”

So that means Cersei, Ramsay and every other crappy character will be dying ASAP yes?

Should Samwell be appointed Chief Jester to the Night’s Watch after his little Ser Janos comedy skit?

Is ‘that smirking whore from High Garden’ the most accurate description of Maegary so far?

Who is Littlefinger marrying? Shall we get a poll going?!

Did you enjoy The House of Black and White? Tweet us @sofeminineUK!