Jack Osbourne and his wife have been hit by the devastating news that she had suffered a miscarriage. Lisa Steely confirmed the news explaining that she had unfortunately lost their child late in her pregnancy. The couple have leaned on one another and the support of friends and family to deal with the pain.

The couple shared their painful news via a blog post.

Lisa Steely admitted that she had been "dreading" writing it and had given herself some time to come to terms with it before letting everyone know.

The couple sadly lost their baby last week and the post appeared on her blog Raddest Mom on Thursday.

It was entitled "Unfortunate Announcement..."

She wrote: "I have been dreading this announcement…. I needed some time before being able to say it.

"Jack and I lost our baby boy last week. Having a late term miscarriage is by far the hardest thing either of us have ever had to go through.

"We appreciate all of your prayers and ask for privacy and respect during this time."

The couple are trying to remain positve for each other and their 16-month-old daughter Pearl.

"We never know why things like this happen. All we can do is trust in God and know he has a plan for our lives."

She has been finding comfort in her husband; the couple married in October and announced that they were pregnant with their second child a month ago.

She tweeted last night: "Cuddling my amazing, sweet hubby & shutting my eyes. Thank you all for the love & support. It means the world."

When they first announced the news they were expecting she told People: "Jack and I are super excited to share with you all that we are expecting our second baby!"

"I am in my second trimester, feeling great & trying not to eat everything in sight.

"We feel so blessed that our family is growing & Pearl will have a little brother or sister to play with. It’s crazy to think that we will soon be a family of four!"

Despite the loss Jack still made it to his first Dancing With The Stars rehearsal on Thursday. 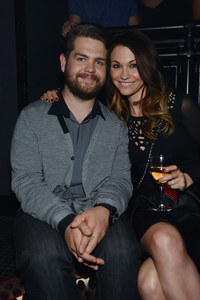 Francesca Menato
…
BabyPregnant
From hair ideas to outifts, look no further for your daily inspiration