What a finale! Made in Chelsea always knows how to deliver, and last night’s episode was no exception as Jamie Laing acted as the man child we know and love, Alex Mytton and Binky Felstead were ever-so-sweet and loved up together, Spencer Matthews redeemed himself and Victoria Baker-Harber was a horrible, horrible person (because there always has to be one.) We’re also delighted that Jamie finally got the girl – Lucy Watson!

It’s miserable to have to say goodbye to Made in Chelsea until the new series, but what a finale we have been left with!

There was unbridled bitchiness, explosive arguments, friendships were reconciled and of course the posho’s went fox hunting! We’re not too sure what was happening – but it looked like the gang released the hounds onto Proudlock and Jamie, who were running away from the gang – all expect Spencer Matthews, who in fact cannot ride despite going along for the fun. 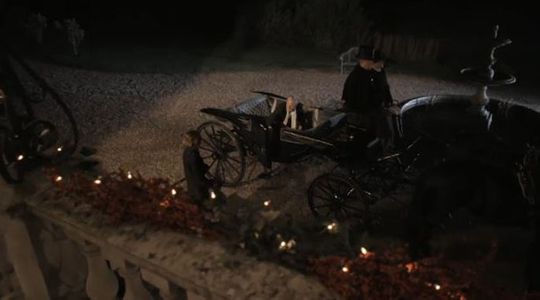 On the plus side though, Spencer has redeemed himself! Sort of. Everyone’s favourite nasty pants invited Lucy Watson to go Christmas shopping with him for a gift for Jamie, who has been obsessing about Lucy for weeks. When Jamie spots them – as shockingly he was in the shopping centre as them at the exact same time – he asks Spencer about it later.

The poor boy was slightly miserable and said: “I saw you guys standing together. What do you want me to think? It really hit hard and it made my heart sink.” Spencer then basically told him he would never get in the way if Jamie truly liked a person. He said: “We were Christmas shopping for you…she really values your friendship or whatever you have…I’m rooting for you. I want you guys to happen.

“Jamie I can’t believe you think that when it comes to someone you genuinely care about that I would be the person to stand in your way.”

Oh my- did Spencer just do something nice? He did! He actually did!

The McVities heir decided to go ahead with his huge display of affection for Lucy, but not before Alex and Binky were extremely sweet to each other at the dinner table. Alex wasn’t ready to spend Christmas with Binky, and Binky was okay with that. He said: “I love spending time with you. I love what we have and I love where it’s going.” We love you Alex.

It can’t all be nice and friendly though, and there always has to be the one person who is the terrible human being. This episode the award for the most awful person goes to Victoria, who started a fight seemingly over nothing, then said this to Cheska: “don’t f**king open your fat f**king mouth you f**king fat turkey.”

Wow. Seriously, wow. Proudlock changed everything though when he told Lucy to go outside.

Waiting for her was Jamie in a horse drawn carriage – dramatic much?! – and told her how much he liked and missed her. Lucy sort of basically said she liked him back, and the two kissed. Yes! Yeeeees!

Just the wrap up party episode to go now! Do you think Jamie and Lucy will still be together? Do you think Victoria will apologise? Tweet us @sofeminineUK