Justin Bieber may be one of the richest, most famous, and most annoying people on the planet, but that doesn’t stop him from wanting to have a cuddle from time to time. Everybody needs cuddles. The only difference is Justin’s snuggle time is with rapper pals Lil Twist and Lil Za (unless you also snuggle with these people, in which case apologies) rather than - you know - a girlfriend or perhaps a pet cat.

Justin Bieber has snapped himself having snuggly time with his rapper pals Lil Twist and Lil Za.

Although most people enjoy cuddling without having to post the evidence online, the single heartthrob has no doubt sparked a frenzy of fan fiction with his Instagram picture which shows the three lounging in a big white-sheeted bed together.

​There were three in the bed and the Biebster said…sorry.

The Baby singer seems to be both lethargic and comfortable with his pals, despite the allegations that Biebs had previously banned the pair from his house after some jewellery had gone missing.

According to TMZ apparently the pair had also been throwing parties in Justin’s absence, which is what probably caused the aforementioned bout of theft.

Although it wasn’t revealed how many gold studded hats and ginormous Rolex’s were nicked since it's clear Justin still has an unhealthy abundance of both, this hasn’t been the first time Justin’s mates have gotten themselves in trouble.

Previous classics also include Lil Twist being charged for driving under influence whilst driving Bieber’s car, and he was also driving when the photographer was killed by another car as he attempted to take photographs of Justin.

Perhaps this photo is an indication that the three know want to do nothing more but snuggle down in the evening and watch Downton Abbey. Doubtful though, very doubtful.

Would you snuggle with the Biebs? Tweet us @SofeminineUK 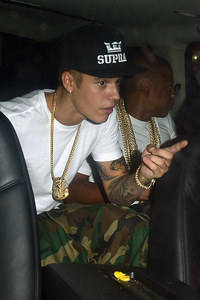