Uh oh, it looks like Kanye West has been having some under the table phone calls with his ex-girlfriend, Amber Rose. Although Kanye is allegedly extremely suspicious of his fiancé Kim Kardashian’s ex-boyfriends, and has banned her from contact with all of them, it sounds like this is a typical case of do as I say, not as I do. Not cool Kanye.

It sounds like Kanye West is about to get himself into a bit of trouble with Kim, as it has been revealed that the rapper has been secretly chatting to his ex, Amber Rose.

According to Now magazine, the 36-year-old actions are especially annoying as he has allegedly prevented his fiancé from getting in touch with any of her exes. A source revealed: “It’s shocking because Kanye’s so paranoid about Kim’s exes. Before she became pregnant, he asked her to cut contact with them all. 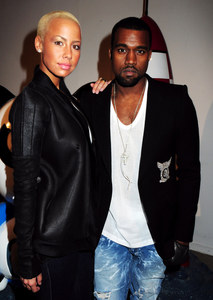 “He’s even talked about getting it written into their prenup that she won’t talk to any of them. So for him to be talking to Amber, of all people, is playing with fire.”

Kanye officially dated Amber from 2008-2010, though in 2012 Amber claimed that she and Kanye had been having a secret affair. She slammed Kim for destroying their relationship on top of that, saying: “She was sending pictures. I was like: ‘Kim, just stop. Don’t be that person.’”

Kim and Kanye denied the allegations, but whilst Kim has kept Kanye’s ex at arms length, clearly he doesn’t feel the same need to stay away from her.

According to source their conversations are perfectly innocent, talking about everything from baby talk to Amber’s husband Wiz Khalifa, but we reckon Kim wouldn’t be best pleased to hear this after Amber’s accusations towards her.

The source continued: “Kim and Amber have a lot of bad blood between them. It’s incredibly disrespectful of Kanye to be talking to her behind Kim’s back. In reality, Kim doesn’t have anything to worry about. Amber’s totally devoted to Wiz, but it’s still really inappropriate – especially considering Kanye’s determined she doesn’t talk to her exes.”

You should get your own back Kim! Maybe give Kris Humphries a call?

Do you think Kanye West is out of order? Tweet us @sofeminineUK