Miley Cyrus has recently been seen getting very close to Twilight star and super hunk, Kellan Lutz, sparking rumours that the two of them were dating. However, it looks like the pair won’t be moving into a Hollywood love nest together anytime soon, since Kellan is pals with Miley’s ex-fiance Liam Hemsworth, and doesn’t want to ruin the friendship. Bros before twerkers!

We all know Miley Cyrus comes in like a wrecking ball when it comes to relationships, but unfortunately it looks like her most recent flame Kellan Lutz has refused to date her in case it ruins his friendship with her ex, Liam Hemsworth.

Liam and Miley had a three year-on-and-off relationship before it came to an end in September of last year, and it looks like Kellan is honouring the bro code by staying well away from his friend’s ex fiancé, despite the rumours that the two had been spotted making out with each other recently. 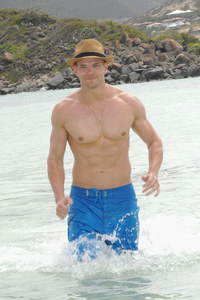 A source revealed to OK! Magazine: “Kellan is friends with Liam and doesn’t want to insult him by getting serious with Miley.

“Miley came on way too strong for Kellan. All he wanted was to have a good time, and when they first hooked up she told him that was all she was after too.”

Apparently not! The Twilight star apparently realised that Miley was “getting too close” and has now “backed off”, apparently leaving him feeling guilty for leading her on. Ah Miley, we’ve all been there! Time to break out the Ben and Jerry’s and obsess over old texts we think!

The insider continued: “He didn’t expect her to get obsessed with him, because she acts so cool and independent. He feels bad. He never meant to hurt her.”

It sounds like Miley might be a bit of a nightmare in relationships then, since the source’s revelations coincide with a report from Life & Style magazine, which claimed that Miley couldn’t understand why men lost interest in her.

The source claimed: “Miley has absolutely no self awareness. She doesn’t see herself the way guys do. She’d love a relationship – she worries she will never find someone who loves her for who she is – but she’s totally unaware of why guys dump her.”

Anyone want to purchase the Wrecking Ball singer a copy of Men are from Mars, Women are from Venus?

Do you think Kellan and Miley would be a cute couple? Tweet us @sofeminineUK

by the editorial team
+
All the news about Kellan Lutz