Lee Ryan hooks up with Jasmine Waltz in the CBB toilets

There’s not much else we can say about Lee Ryan’s questionable escapades in the Celebrity Big Brother House anymore. We can only shrug helplessly as he continues to forget that there are cameras in the house everywhere so people can both see and guess what he is doing when he sneaks into the bathroom with Jasmine Waltz and turn the tap on! As for you, Jas, you are just as bad. You really couldn’t go a few more days without hooking up?! Really?!

It looks like this year’s controversial house member Lee Ryan and his flame for the moment Jasmine Waltz – because he’s already had more than one – have been…ahem…’grown up cuddling’ in the bathroom.

The two of them had a comforting kiss and cuddle after a particularly awkward nomination where the contestants were forced to nominate each other face-to-face, leaving Jasmine in tears after columnist Liz Jones told her that her beauty made her want to kill herself. 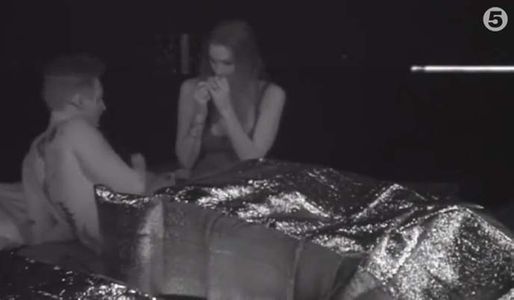 She certainly perked up when Lee whispered to her: “I want to look after you and I want you to look after me”, before the two of them skipped off to the toilet.

Twitter was also in a flutter – of annoyance more than anything – when Lee sort of proposed to Jasmine in the episode. Ten days after meeting her, nice! We hope he was only joking though, as he said: “Anyway, when we getting married?”, to which she replied: “today, let’s have a ceremony.”

The Blue band member then asked if he should get down on one knee, and Jasmine wasted no time in slamming her love rival, housemate Casey Batchelor, nodding yes then saying: “In front of Casey.”

She was probably feeling a little bitter though, as in the face-to-face nominations Casey voted for Jasmine, claiming that the reason was because of Jasmine blaming her for Sam Faier’s argument with Jasmine and Luisa, which later turned out to be a fake secret task.

Following the nomination, Jasmine ranted that she wasn’t going to hold back with her new, annoying – we mean adorable – boyfriend. She said: “I feel bad for her now because I’m not going to be sweet anymore and I’m not going to try and hide anything [with Lee]. I was trying to protect her.

“You think I care? Yeah, I yelled at her, but she said this…’No one else in the house hurt me.’”

So girl fights, toilet shenanigans and Lee Ryan is at the centre of it all! What do you think? Tweet us @sofeminineUK