This week some of the Made in Chelsea gang went to Africa to awkwardly look at animals and talk about their feelings! It’s one thing to do this in restaurants in Chelsea and chalets in Switzerland, but standing in a field…looking at buffalo…just awkward, especially when Jamie Laing and Spencer Matthews are still on the hunt for Lucy Watson’s affections, leading to heartbreak for poor Mr Laing.

Jamie Laing was heartbroken on last night’s episode of Made in Chelsea after Lucy Watson rejected his advances. Cold Lucy!​

Binky Felstead, Phoebe-Lettice Thompson, Spencer Matthews, Alex Mytton, Lucy and Jamie all went to Africa, apparently with the memo that they should all dress in orange and cream and talk about their feelings. We knew it would be awkward, especially as Spencer and Jamie were going head-to-head for Lucy’s affections, but we had no idea how strongly Jamie felt! 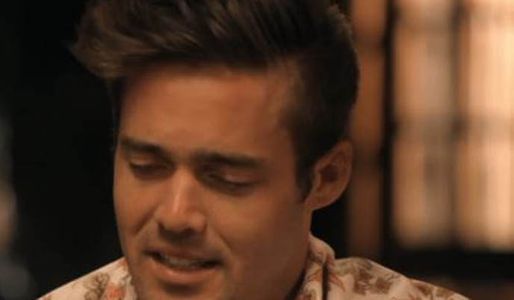 He said: “I’m literally like a puppy following some chick. People underestimate it. I really like her.”

The McVities heir also looked less than impressed when he caught Spencer and Lucy chatting together, especially when Spencer smugly told him how well they’re getting along.

In her defence, Lucy admitted to Jamie: “If I talk to Spencer, I feel like you get the wrong idea!”

However, it quickly transpired that Lucy did not hold romantic feelings to either of them, and she and Phoebe slowly made friends with each other as they discussed her situation – yes! Lucy and Phoebe spoke without slagging each other off! Together, they could conquer the world!

Phoebe said in a surprising gesture of support: “It’s like Lucy is the prize.”

Jamie finally decided to hit the nail on the head by visiting Lucy during the night, telling her: “I have your ex-boyfriend looming over you wherever you go. God, this is death. I have a big problem right now. I’m in love with you.”

OMG. Finally! Will Lucy say she loves him? Will everyone live happily ever after?

Lucy told him: “I don't think you are.

"In the early stages I really liked you and then there have been hiccups along the way and every small thing has set me back and back. I don't have those kind of feelings anymore."

Aw, Luce! The two of them started crying as Jamie told her he couldn’t be friends with her before leaving the room. It was genuinely so sad, and to add insult to injury we all know that somewhere Spenny is punching the air in glee.

Did you want Jamie and Lucy to be together? Tweet us @sofeminineUK