It looks like Miley Cyrus has put away her tongue in favour of some new, horrendous teeth! We’re not sure if this is better or worse to be honest, but at least her cute little husky posing in the picture looks just as scared as we do at Miley’s new look! She’s also been moaning a good bit about the paparazzi – nothing unusual there then!

Miley Cyrus might need to go and see a dentist after posting a selfie on herself with horrendous teeth. Okay, they might be false teeth but still, ew!

The We Can’t Stop singer posted the disturbing snap on Twitter without any caption, perhaps expecting we could fill in the blanks of her psyche herself. Well, we can’t. What on earth was she thinking?!

The snap’s saving grace was the inclusion of Miley Cyrus’ adorable husky puppy, who also looks terrified of his owner! Although this is by no means not the first selfie Miley has posted on Twitter, apparently she isn’t a fan of taking snaps of herself.

She told Barbara Walters in an interview: “I get embarrassed to take pictures. That’s actually the truth. I’m so embarrassed because people are taking pictures of me and I don’t know how to smile, and just be awkward, so I stick my tongue out, because I don’t know what else to do.”

Stick on false teeth is one answer, Miley!

The singer has also recently been moaning about the paparazzi, since yesterday she couldn’t even leave the house to take her puppy for a walk. She took to Twitter to vent, saying: “I can’t even take my dog for a walk on a Sunday.”

She then tweeted: “Paps suck a fat…” along with the snap of an eggplant. Fair enough! It must be frustrating, so yeah. Suck a fat eggplant, paps! 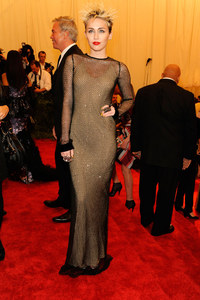