Miley Cyrus has worked hard to make the parents of the world less than impressed with her 'I'm a grown-up now' antics. But there's one father out there who's got no problem with it - her own! Billy Ray has spoken out in defence of his daughter and her nude video for her latest track Wrecking Ball.

Billy Ray Cyrus has spoken out to defend his 20-year-old daughter for riding a wrecking ball naked in her latest music video.

Miley Cyrus set yet more tongues wagging when she released the promo for her emotional track.

The video shows her fully naked, writhing around in rubble and licking a sledge hammer.

And yet, her father is proud as punch - you have to wonder what it would take for him to be offended by anything she does!

He told Entertainment Tonight about the new release: "I'm a song man. A musician singer-songwriter who loves all styles of music.

"But again... I come from the old school where it starts with an artist and a song... colliding if you will... in a moment where the song, the singer, the producer, the band and the listener become one.

"It wouldn't have mattered if Miley would have worn jeans and a flannel shirt... a Tux... or a nun's habit. The song's a smash... and her performance vocally on the tune reflects her roots and sheer God-given talent."

Miley herself has also explained the choices she made.

She said on New York radio on Wednesday: "If people get past the point I make, and you actually look at me, you can tell I look more broken than even the song sounds.

"If people can take their minds off the obvious and go into their imagination and see what the video really means, it is so vulnerable… If you look at my eyes, I look more sad than actually my voice sounds on the record.

"It was a lot harder to actually do the video than it was to even record the song. It was much more of an emotional experience."

Miley, you're naked - that's what everyone's talking about - if you wanted to make a more subtle point we'd suggest a different approach. 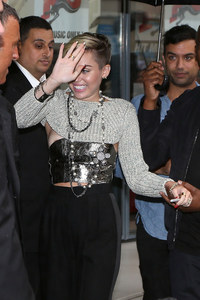