If you are a fan of the showrunner of Doctor Who and creator of Sherlock, Steven Moffat, you’re going to love this news! BBC have debuted their new showreel for the merriest season a.k.a the most exciting time for telly with sneaky sneak peeks of our favourite shows, Sherlock and Doctor Who. Is anyone looking forward to these new episodes more than opening presents this year? Just us?

The BBC have debuted their Christmas showreel with some amazing sneak peeks into Doctor Who and Sherlock – exciting times!

The Doctor Who Christmas episode - which is entitled The Time of the Doctor - will air on Christmas Day, and it's set to be Matt Smith’s last outing as the eccentric Time Lord.

Although we have already seen a short trailer of the episode, this showreel shows some interesting new footage of the villains, including the Silence, Cybermen (meh), the Weeping Angels and the ever-deadly Daleks.

We also catch a glimpse of a smiling Matt Smith saying: “Hello everyone, I’m the Doctor.” Yes, but not much for longer Matt! (Sob).

As for Sherlock, we are deprived from hearing any of the characters actually speaking, but we do catch a glimpse of Sherlock Holmes looming out of the shadows looking extremely grave about something, and that in itself is a reward for our years – yes, YEARS – of patiently waiting.

The preview also shows a Martin Freeman as John Watson snuggling in bed with his new love interest for the series, real life wife Amanda Abbington, who will play the role of Mary Morstan. However, he looks extremely serious and sad.

We’re guessing he doesn’t know that Sherlock did not, in fact, die from jumping off a roof after all, although another clip is shown of Sherlock standing on the roof looking very pensive. Haven’t you learned from previous experience Sherlock? Get down from there!

Although that is sadly all we get from the preview, there is also an abundance of other popular BBC series that promise to be fantastic, including Call the Midwife, Strictly Come Dancing and Eastenders.

Is anyone else getting seriously excited about Christmas telly yet, or is it just us?! Tweet us @sofeminineUK 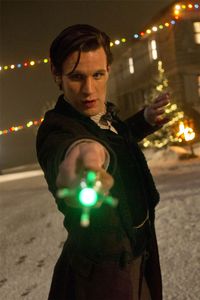 Emmy Griffiths
…
Doctor WhoSherlock
For all the best videos, memes and shareable news!