Niall Horan sure knows how to make the girls swoon. The One Direction hottie has posted a picture of himself cuddling up to his new nephew. The adorable snap comes after his older brother Greg and his wife had their first child.

Niall Horan has taken to social media to show the world his new nephew.

The One Direction heartthrob has posted a pic of himself with his brother's newborn baby boy.

We're not sure who's looking more cute - Niall or the little one.

He captioned the photo: "Congrats Greg and Denise! Wohoooo! I've got a nephew! Cutest kid ever!"

1D fans have bizarrely decided the tot is named Zeus, but it appears that is just a strange rumour.

Niall's bro told The Sun he and his wife were still undecided on a name.

The singer took time out of his hectic tour timetable to travel home to Ireland, when he learnt his sister-in-law Denise had gone into labour.

He spent hours waiting with his older brother for news of the bub's arrival.

Niall was best man at the couple's wedding four months ago and found out the news of the pregnancy on the day.

The 19-year-old also took to Twitter today to wish his dad a Happy Birthday, giving another nod to the new arrival.

He wrote: "Happy birthday to the greatest Dad/ new grandad , The one and only bobby horan! #happybirthdayDa."

There's a lot of love in the Horan family. 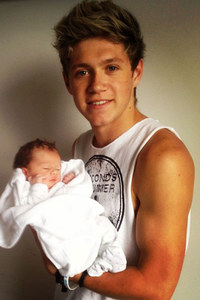