Niall Horan has kept fans' hopes alive for years as one of the few single members of One Direction. But now it seems he too may be off the market. Just like his bandmate Harry Styles, Niall's taken a shine to an older lady: singer Ellie Goulding.

The pair were enjoying the Kings Of Leon set on the final day of the Essex fest when they apparently got pretty close.

Niall has previously said how much he likes Ellie and it looks like now she's flying solo he's happy to swoop in.

War Horse actor Jeremy is in fact three years younger than 26-year-old Ellie - so perhaps she’s got a thing for the younger man.

The Mirror reports that the 19-year-old 1D singer was attempting to remain incognito in a hoodie and sunglasses while hanging out with his famous pal.

Ellie Goulding dishes on famous female friends and celebrity exes
Like most women in their twenties, singer Ellie Goulding is learning some very valuable lessons about men and best friends. The Burn singer is opening up about both in her latest candid interview in Cosmopolitan, where she discusses BFFs Taylor Swift, Rita Ora and Cara Delevigne, and her heartbreak after splitting from dubstep producer Skrillex and Radio 1 DJ Greg James. Ellie is just like us – apart from the fact we’re not wildly successful and talented singers!

Ellie was also aiming to fly under the radar in an oversized hooded jacket.

With Ellie landing her first number one single and Niall as one fifth of the biggest boy band in the world, it was going to take more than just a hood to throw fans off the scent.

So the two had a crowd of friends and a bodyguard surrounding them as they laughed and chatted through the set.

It was during the band's encore that Niall apparently put an arm around Ellie and kissed her on the lips.

During KOL's final number, the pop stars then scurried off to the VIP Mahiki club area backstage, where they partied until 12:30am.

Last month the 1D star spoke about his seemingly quiet love life thanks to his hectic lifestyle.

He said: “We go back on the road straight after a show and we’re gone.

“I wish we did have time for girls and parties but we don’t. [But] I’ll say one thing: Ellie Goulding - wow. She’s absolutely amazing looking.”

NIALL'S GOING OUT WITH ELLIE GOULDING whaT

Yesterday a spokesman for Niall declined to comment, while a spokeswoman for Ellie told The Mirror the pair are “just good friends”.

As with any 1D romance, watch this space - and Twitter - those Directioners are always one step ahead.

Fans were already cursing their bond a week ago when Niall posted a tweet encouraging people to get her single to number one.​

We reckon Ellie can hold her own. 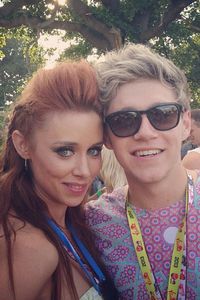 by the editorial team
+
All the news about Ellie Goulding