One Direction This Is Us: Ten Little Things we learnt from the 1D movie

Unless you've been living under a rock or in a room with no Internet or television, you'll know that last night was One Direction's movie premiere. The stars were out in their droves to see the world’s most popular boyband take to the big screen. So what did we learn about the self-confessed five luckiest guys in the world? Apologies in advance to any Directioners who may have known these facts long before us...

1. Harry's first kiss was up against a tree near his house

Ladies' man Harry Styles showed the cameras around his home town, including the park where he revealed he shared his first kiss.

He said: "It was up against a tree...and it was pretty steamy."

2. The boys considered chucking Zayn out of the band

The film revisited the lads' days in The X Factor and they admitted that back when they first formed into a group, Zayn Malik missed an important coffee date that made them question his future in the band.

Liam Payne explained they even had a "serious conversation" about kicking him out. Don't worry though, the movie also shows them discussing how 1D wouldn't work if even one of them wasn't in it.

Zayn also recounted the story of his mum dragging him out of his bed at 4am to audition - if she hadn't forced him, he wouldn't have gone.

Well, not quite naked...but topless at least.

We saw Niall Horan stripping off to lay down tracks for the new album and he explained he likes to "feel free".

He even recorded his part of What Makes You Beautiful in his boxers.

4. The boys thought Louis had the best shoes

When the five lads first got put together during The X Factor, they apparently found themselves focusing more on their outfits than their singing.

The boys were all convinced they needed shoes like Louis Tomlinson's, believing him to be the most fashionable member of the group.

Fortunately, they eventually got round to working together - but admitted that they mostly spent their time bonding and playing football.

Niall said: "We needed to become friends before we became colleagues."

5. Harry thought it was all a cruel joke

All five boys were originally knocked out of The X Factor before Simon Cowell decided they should be put together into a group.

But baby-faced 16-year-old Harry Styles was not amused when his name was called out shortly after he'd been told he was going home.

Zayn recalls in the film that Harry threw a strop, telling his future bandmates they were being set up by the show, just so they could be filmed crying on TV.

6. Liam is most excited about having a wife and kids

We see the boys chatting about their futures and the time when they won't be playing sell-out arenas.

Although some of them are afraid - Harry admits he wants to carry on until the time when "people are asking why I'm still alive" - Liam Payne sees it as a "Benjamin Button thing".

By this he means they get to do everything backwards and have a normal life - "with a wife and kids later."

He added: "That's the bit I’m most excited about."

7. Niall was the most popular at Boot Camp

The boys recounted memories of The X Factor Boot Camp and when they first met.

They spoke about how wherever there was noise, there was Niall.

Harry said: "There was always a guitar and a crowd of people around him."

8. Louis used to try to pick up girls in Toys R Us

When Louis Tomlinson revisits his old workplace, Toys R Us, he admits it's the only job he wasn't sacked from.

The charmer goes on to confess he used to hang around the keyboard aisle hoping to impress girls with his piano skills rather than doing any work.

9. Zayn has a graffiti room in his house

As you've probably seen in the trailer for the movie, Zayn Malik buys his mum and sisters a house - he feels it's important to give back to his mum as she's the one who persuaded him to go on The X Factor.

Of course, this also meant he could have his own house where he could spray paint graffiti all over the walls of one room.

The film shows Zayn hard at work on some drawings, after he admits he was never interested in the same things as other boys.

He says: "Everyone liked football, I was always more creative."

10. Liam would have been a fireman

It's hard to imagine what the lads would be doing if they weren't global superstars. While a couple of them would probably be at university, it seems Liam would have gone straight to the emergency services.

Asked why he'd be a fireman he said: "I always liked the idea of saving people." 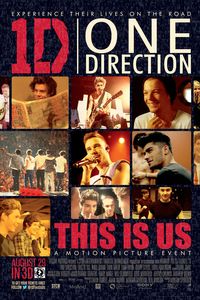