Almost a month ago Peter Andre and his fiancé Emily MacDonagh proudly announced the arrival of their baby girl, and we couldn’t wait to hear what name they had chosen for their little bundle of joy, even though Peter joked they were waiting for the kids opinion before they picked a name. Three WEEKS later they have finally revealed their daughter’s name, and it’s gorgeous!

Peter Andre and his fiancé Emily MacDonagh have come up with a name for their newborn daughter – finally!

The Mysterious Girl singer and his partner announced the arrival on their daughter on January 7th, and since then they have been pondering for a name.

Speaking to Jonathan Ross on his chat show, Peter joked about how much they were struggling to settle on a name. He said: “We have four names/ Maybe you can help me out actually. We had Rose. I love Rose because it’s English and beautiful. Amelia, beautiful name. Elizabeth. Alexandra. So these are the four name that we’ve been throwing around. 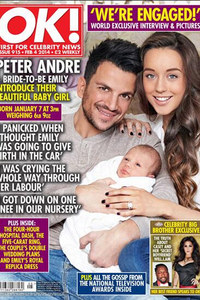 “Then three days ago Emily throws another spanner in the works and says, ‘What about Poppy?’ Poppy is a name name, then she threw in Isabella and I thought that’s a nice name. So we’re sort of in a bit of a pickle here.”

He admitted that he was going to let Emily choose the name, and told Jonathan: “I’ve had two children, biological children, and this is her first, so I want her to be happy.”

The 40-year-old singer finally made the announcement that they had chosen to call their daughter Amelia on Twitter. He wrote: “Ok FINALLY we have a name for our beaut of a baby girl. Ems, J, P and I have decided on Amelia J))) So lovely fans before you read it anywhere else here it is. Love ya J”

Aw, what a sweet name! We’re glad they didn’t go down the celebrity name route as Pete had in the past (ahem – Princess Tiami?!).

Medical student Emily did admit she found childbirth extremely difficult though. She said: “I’m proud of myself for getting through it. I pulled a lot of Pete’s hair out, but he’s got enough to spare. I was so happy she was healthy, it was amazing. I was looking at her perfect form and little fingernails. I kept thinking, how did we make that?”