We can’t get enough of our favourite power couple Beyonce and Jay Z and their gorgeous toddler Blue Ivy, so we are loving the new snaps of the family that Queen B has shared on her Tumblr page. It shows the family living a life of utter glamour as Beyonce poses in her underwear whilst letting Blue use her iPhone as a chew toy. Beyonce also takes a snap of Jay Z being a hand on dad, although little Blue clearly has no interest in his music taste!

Beyonce has been sharing snaps of her family again, and the three of them are so cute we can’t even take it!

The singer has began to flood her Tumblr account with intimate snapshots of her family and we are definitely not complaining!

This time the Love On Top singer was backstage for one of her sold out dates for The Mrs Carter World Tour and looked ready to get into costume with full hair and make up all finished, but clearly wanted to spend some time with her daughter first and was all smiles as Blue Ivy cheerfully used an iPhone as a toy. 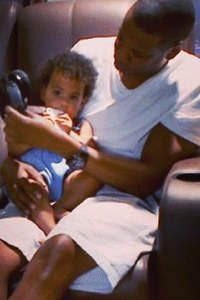 Beyonce was looking smoking and couldn’t help but pose a little as she tossed her blonde locks about, but it looks like she managed to get a candid shot of her hubby Jay Z as he sat with Blue on his lap whilst holding some headphones. Did he want to make his daughter his biggest fan? Or was he trying to play her the lullaby that Kanye West apparently recorded for her birthday? Either way, it didn’t look like she was much interested!

The snaps also showed how much weight Beyonce has lost recently. The yummy mummy revealed that she wanted to be seen as fun and sexy in her new music videos, and so slimmed down to an incredible 130lbs.

You have to love her, don’t you?! Tweet us @sofeminineUK