Last year Downton Abbey gave us all a merry Christmas by tearing our hearts out and stamping on them with their well-polished brogues, killing off beloved character Matthew Crawley moments after he'd met his newborn son. This year we’re hoping things are a more cheery, especially as there's been no word of cast departures and show creator Julian Fellowes might incite a riot this year if he once again takes the joy out of Christmas. The new pictures certainly seem to look cheerful enough!

The pictures from the Downton Abbey Christmas episode are here and this year it looks like the episode will actually be pretty cheerful!

The episode will supposedly be set six months from the end of series four, which ended just as Anna’s attacker Mr Green died after being hit by a bus.

Suspiciously Mr Bates had been away from Downton around that time and knew the identity of the man who had assaulted his wife…will there be repercussions? There are no snaps of Bates or Anna in the cast photo – so should we be concerned?
​
However a delighted throwback to season three has returned in the form of the one and only Martha Levinson (Shirley MacLaine!), who visits her daughter Cora for Christmas whilst accompanied by her son and Cora's brother Harold Levinson.

Seasoned Hollywood actor Paul Giamatti will be making his debut on Downton this Christmas and we’re not entirely sure Harold is going to be a good guy – He’s been described as a playboy, and he generally looks shifty! 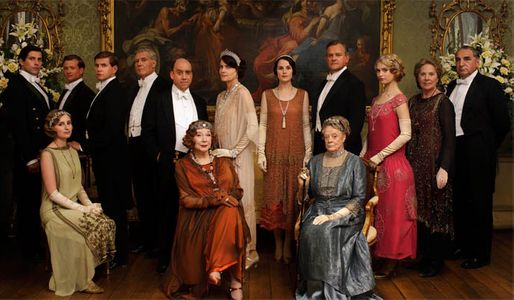 The episode will also partly be set in Buckingham Palace as the relatively new cast member Lady Rose 'comes out' to society in a fabulous floor-length white gown, gloves and feathery head dress (why can’t we dress this way anymore?) whilst accompanied by her aunt Cora, Countess of Grantham.

We’re very excited that it will be set at the Palace – especially since there are an awful lot of footmen in uniforms in the pictures, which show Rose curtsying and then laughing with Cora as the couple ascend up the plush staircase.

The episode, which will be a two-hour special, also sees the family and servants travel up to London, so the Crawley’s London residence will be seen for the first time, as opposed to previous mentions of it whilst they all sip tea in Yorkshire. It’s about time we left the countryside!

However there's still the big question about Edith’s pregnancy – as she decided to keep her baby after shacking up with her boss/lover Michael Gregson who has since disappeared – which is something that the people of Downton Abbey seem by-and-large unconcerned about in these pics.

If six months have passed since the season four finale, you would think Edith would have quite a bump by now – but in the cast shot she is looking her slender self. So what IS going on?

Hopefully we'll get the answers to our questions on Christmas Day! Will you be tuning in? Tweet us @sofeminineUK!