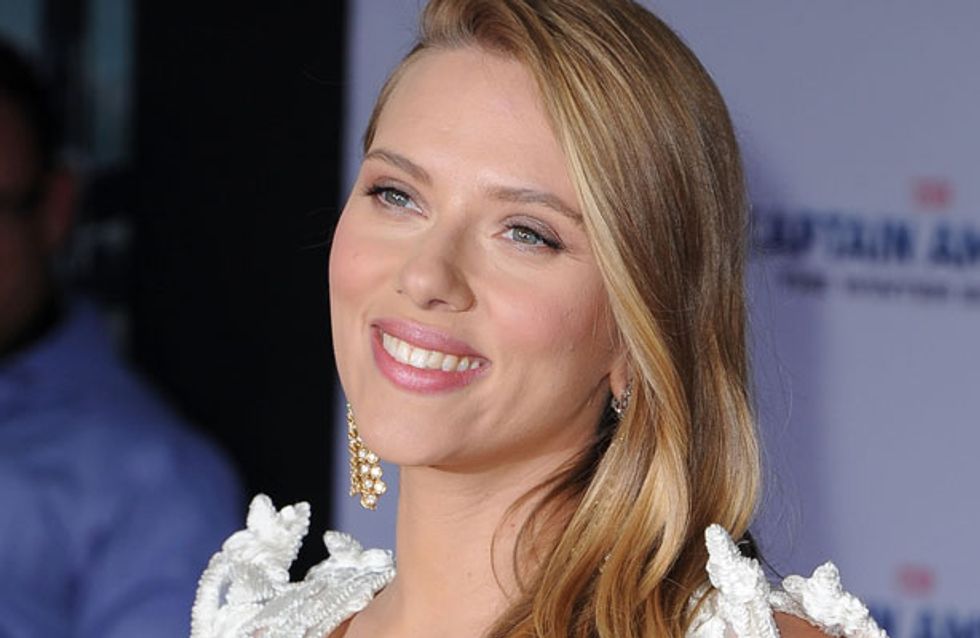 Hollywood is experiencing an epic baby boom! It seems every day brings a new celebrity pregnancy announcement; and we're not complaining. Sultry Scarlett Johansson is one of the latest stars to join the growing list of expectant mums. Last night, at the Captain America: The Winter Soldier Hollywood premiere, she gave the world its first look at her burgeoning bump.

Oh baby! Scarlett Johansson looked every bit the hot mum at the Hollywood premiere of her latest film Captain America: The Winter Solider. The actress hit the red carpet in a cleavage-baring Armani Privé black and ivory ensemble that hugged her curves in all the right places.

Scarlett Johansson is pregnant! A look back at ScarJo’s story, from debutante to future Hollywood power mom
The Black Widow herself is pregnant! Actress Scarlett Johansson is expecting her very first child with fiancé Romain Dauriac. Scarlett has been in the Hollywood spotlight for years, but that doesn’t mean there haven’t been bumpy roads. We’re taking a look back at ScarJo’s story, from her breakout adult role in Lost in Translation, her marriage to Ryan Reynolds, her evolution into a sex symbol and everything in between!

It was the very first time the public was treated to a glimpse of her pregnant bod, and now we're eager for more. We'll definitely be keeping an eye out for her maternity style.

ScarJo's journey into motherhood made us revisit some of our favorite celeb pregnancy reveals...ever!

While false pregnancy rumors surrounded Beyoncé for years, no one suspected the star was with child prior to her 2011 MTV Video Music Awards appearance. When she hit the red carpet for the annual event, she brought emphasis to her midsection, giving photographers the now iconic money shot.

She broke a Twitter record after performing her hit "Love on Top" and lovingly rubbing her tiny bump.

Kanye West was the first to spill the beans on Kim K's pregnancy during one of his Yeezus tour concerts. However, it wasn't until New Year's Eve at 1 Oak Las Vegas that we were able to finally peep the reality star in prenatal mode. Kim flaunted her itty-bitty belly in a sheer Julien Mcdonald frock for everyone to see.

Fergie and Josh Duhamel took to their respective social media accounts to unveil their baby news. How cute are they?

Ciara on The View

There were months filled with pregnancy whispers prior to R&B star Ciara's reveal. She finally confirmed the news when she visited The View. She looked absolutely stunning!

Actress Busy Philipps announced the impending arrival of her second child with a picture of a positive Clearblue pregnancy test. It doesn't get more straight forward than that, now does it?

What are some of your favorite celeb pregnancy reveals ever? Tweet us @sofeminineUK!