Sherlock fans can barely contain their excitement after the BBC released the first teaser clip for the third season of their hit show. The video appears to show Dr. Watson dealing with life minus his partner in crime...and the death defying detective's reappearance.

Sherlock fans have been left desperate for more after the BBC released a tantalising clip for series three of the hit show.

With classic Holmes style music, we are taken back into the world of the eccentric detective.

With no official release date for the first episode, die-hards have to make do with this snippet to tide them over.

Typically guarded, the BBC has not given much away in the trailer - but have certainly whet our appetites.

The atmospheric clip begins with the Baker Street landlady Mrs. Hudson looking suspiciously around the flat.

This is followed by a number of recurring characters, including Sherlock's brother, plus Dr. Watson sat in a restaurant.

Meanwhile, a recognisable shadow appears by a door.

With no explanation of how he survived his fall at the close of series two - they could hardly tell us that - Benedict Cumberbatch emerges.

The title character looks to be approaching the restaurant where his trusty sidekick Dr. Watson is sitting.

At this point Martin Freeman's character is as dumb as we are over Sherlock's ability to beat gravity.

The clip ends: "Sherlock, to be continued..."

Joining the cast in this series of the show is Lars Mikkelsen, known for his role in the Danish hit drama The Killing.

He will take on the role of Charles Augustus Magnussen, the detective's latest enemy.

Well-read Conan-Doyle fans will be expecting the new villain to share traits with his written counterpart, a callous blackmailer.

Sounding good already - too bad we have to wait months for the full episode! 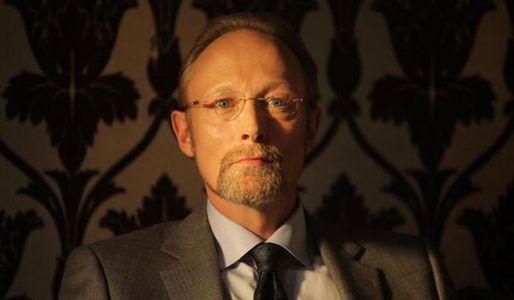