Guys, we’re worried about Shia LaBeouf. It seems as though fame has been chewing away at him over the recent months, what with his bizarre response when he was accused of plagiarism and his retirement from Twitter back in January, and now he has both walked out of a press conference half way through, and attending the premiere to his new movie with a bag over his head. Where’s the guy from Even Stevens and Holes gone? We want him back!

We think it’s fair to say that Shia LaBeouf’s recent behaviour is indicative that he may have lost the plot.

The once-Disney child star has been in more than his fair share of controversy lately due to an accusation of plagiarism for his short film Howard Cantour.com, which was noted for it’s extremely close similarity to a comic by Dan Clowes. Following an apology, the troubled star hired a skywriting company to spell out: “I AM SORRY DANIEL CLOWES”, which he then tweeted to establish it was a sarcastic apology, writing: “You have my apologies for offending you for thinking I was serious instead of accurately realizing I was mocking you.”

Jaden Smith tells Shia LaBeouf: “I’m Here If You Need A Fellow Insane Person To Talk To”
Shia LaBeouf has been a little erratic, to say the least, as of late. After appearing on a red carpet with a bag on his head reading “I AM NOT FAMOUS ANYMORE,” the Transformers actor has now opened a one man art show in Los Angeles. Fellow actor Jaden Smith tried to get into the show, but after waiting in a long line and not getting in, he tweeted a message to Shia: “I am here for you”!

The star then disbanded his Twitter account, writing: “In light of the recent attack against my artistic integrity, I am retiring from all public life.”

However, this didn’t stop him from tweeting once a day for a month, repeatedly writing: “I AM NOT FAMOUS ANYMORE.” The star then took it a step further, showing up at the premiere for his movie Nymphomaniac wearing a bag over his head printed with the same message. Wow, just wow.

Although this would be enough to raise eyebrows at Shia’s alarming behaviour, the strange antics continued at the press conference for the film. The 27-year-old actor attended the conference in grubby and ripped clothing - come on Shia, anyone can dress better than that, get yourself to Primark! – before stating a cryptic quote then walking out.

He said: “When the seagulls follow the trawler, it is because they think sardines will be thrown into the sea. Thank you very much”, before standing up and walking out as his co-stars nervously laughed.

What do you think he’s doing? Has LeBeouf lelost it? Is this all for a movie role, like when Joaquin Phoenix went slightly cray cray back in 2009?

We’d love to hear your thoughts because we’re scratching our heads! Tweet us @sofeminine 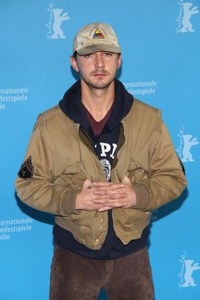