The New Han Solo Is Almost Definitely One Of These Guys 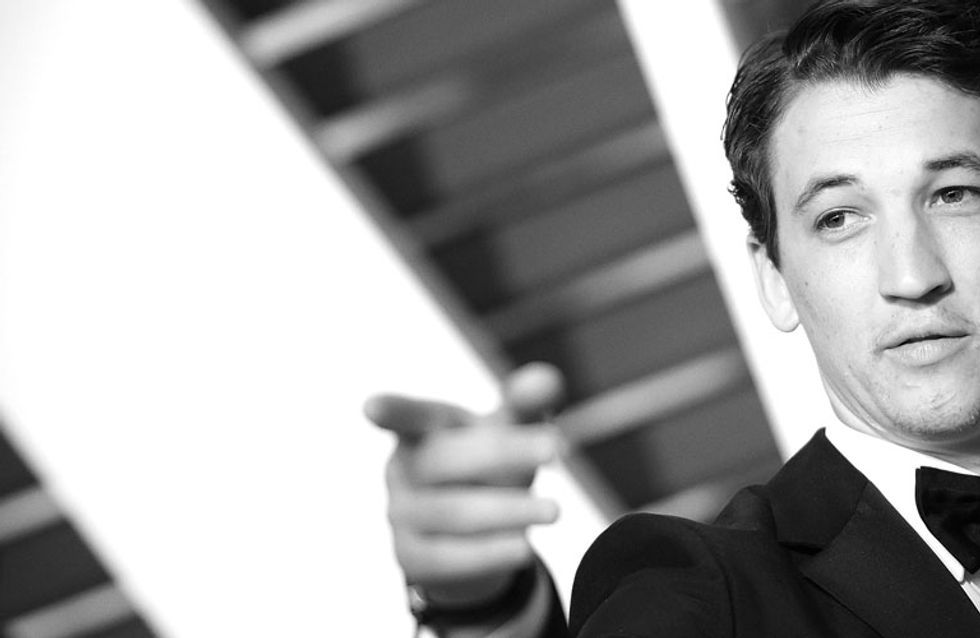 Guys, it's time to face facts. As beautiful and majestic as Harrison Ford is, he really can't reprise his role of Han Solo for the Star Wars spinoff prequel movie currently in the works. which follows the life of the scruffy-looking nerf herder in his younger years. So the BIG question is, who will be given the hefty role of playing this screen icon next? Apparently, this is the bunch who have made the shortlist...

According to Variety, the shortlist for the young Han Solo movie is here and one of these actors will be taking on the role of a lifetime, piloting the Millennium Falcon for the very first time.

The spinoff, which is set to be directed by Phil Lord and Christopher Miller (The Jump street movies, Cloudy with a Chance of Meatballs) is due to be out in 2018, so at least we'll have plenty of time to get accustomed to the idea! Check out the final eight going in for the role...

Finding critical success in Whiplash, then not so much in Fantastic Four, Miles is definitely brilliant actor, and also a bit of a personality. For example, his now famous Esquire profiling begins with the sentence: "You're sitting across from Miles Teller at the Luminary restaurant in Atlanta and trying to figure out if he's a dick," and he also received criticism after bashing his role in the young adult movie Divergent, telling W Magazine that he had only taken the role for "business reasons."

However, isn't the attitude of kind of not giving a sh*t kind of perfect for Han Solo? Also, if you've ever seen The Spectacular Now, you'll see Miles can also be quite the charmer, which is an absolutely MUST for Han. Check him out in action:

Dave Franco is the wide grinning younger brother of James Franco, and while he has a face like sunshine and a laugh like a spring's summers day, his filmography is mainly made up of fun Seth Rogan-esque comedies peppered with the occasionally rom-com.

​But where's the grit? Where's the sawing your arm off when trapped in a rock for 127 hours like your brother, Dave? We'd love to watch his face shoot bounty hunters first and what not, but we want to know he's capable first!

The chiselled, cleft-jawed former-Glee star (no relations to the Kardashians, thank goodness) has dabbled in telly since landing his starting role in The Glee Project, and is now starring opposite his wife Melissa Benoist as Adam Foster in Supergirl.

We're going to level with you guys. Blake looks like a nice boy. He does! He has really nice hair and great teeth. But is he Han material? If we were going to cast this guy as an earlier version as anyone, it would 100% be Luke.

Emory has most recently starred in Brooklyn, and has quite a year ahead of him as he is due to appear in six movies, so although he may be relatively unknown now he definitely won't be by 2017!

Clint Eastwood's son might have been the latest Nicholas Sparks poster boy in The Longest Ride, and it makes sense because just look at him.

Scott actually looks like he could be smuggling his way across the galaxy while maintaining his cool and avoiding paying anyone back their money while getting routinely hammered with his BFF Chewie, but is he quite right? Perhaps a little TOO chiselled? Maybe it's just because he's not Harrison Ford. This is hard guys.

Poor Logan has been on his fair share of shortlists lately. He lost the role of Spiderman to Tom Holland, but could Han Solo be the role he has been waiting for?

Personally, we think the Perks of Being a Wallflower actor might be a little too innocent looking to take on the role, but perhaps the character of Han Solo is very different to the one we know and love where a wide-eyed innocence might actually work pretty well? Either way, his role is Fury shows that he is one hell of an actor:

He's been in Transformers 4 and he's due to appear in 5. We know. But before you throw him to the wolves, let us tell you the rest of his filmography. He appeared opposite Michael Fassbender in Macbeth. He is due to appear in the Jungle Book: Origins as Brother Wolf, and he held his own in the indie film What Richard Did. Basically, this guy is one versatile actor, but is he the right guy? To be honest, we kind of like him.

Ansel is best known for playing one half of the tragic couple in The Fault in Our Stars, a role which made him kind of universally loved every every girl under the age of 21. Winning the Young Hollywood Award for Fan Favourite Actor, it might well be that Ansel is the most popular choice for a new generation of Star Wars lovers.

Who would you most like to see in the role (Harrison Ford is not an option!) Tweet us @sofeminineUK!