Strictly Come Dancing series 11 starts tonight, so we decided to round up our favourite moments from the past 10 years. We've got wardrobe malfunctions, judges madness, epically good routines and disaaaasterous dances. If you've been watching for years, here's a treat from memory lane. If you're new to the show, you'll see just why people can't get enough of the sequins and glitter.

Last year's Strictly was a bumper year with lots of Olympians taking to the ballroom.

​One was the eventual winner Louis Smith, who wowed both the audience and judges in his final showdance with his partner Flavia Cacace.

The fact he was topless had nothing to do with it...

Back in 2008, John Sergeant made an attempt at a Paso Doble - a passionate Latin dance.

Sadly for John (although great for us), he dragged his partner Kristina Rihanoff around the floor rather like a bag of spuds.

3. Brendan Cole's spat with the judges

In series five, the judges had high hopes for Brendan Cole and his celebrity partner Kelly Brook.

So high, in fact, that when they delivered an apparently average performance they were incensed.

After a tirade of criticism - Kelly looked like she may cry - Brendan tried to weigh in.

It took Bruce to settle them down. Good ol' Bruce.

Ann Widdecome never really found her dancing feet when she was on Strictly, so one week she and her partner Anton Du Beke ignored them somewhat.

Ann was hoisted into a harness and flew down to the dance floor - needless to say it was not incredibly graceful.

5. Bruno Tonioli falls off his chair

In the most recent series of the show, Lisa Riley performed a dance routine judge Bruno Tonioli particularly enjoyed.

He got so animated in his praise that he fell off his chair - genuinely.

Skip ahead to five minutes if you just want to see the silly slip.

The song choice - Beyoncé's Crazy in Love - made Alesha even more fierce than her previous dances.

7. Mark Ramprakash gets a second shot

The final of series four experienced a technical hiccup when eventual winner Mark Ramprakash and Karen Hardy tried to do their salsa.

His microphone pack got caught and messed up the whole routine.

The pair stopped halfway through and were given a second chance - which went off with plenty of hip action and not a hitch.

In week nine of the ninth series of Strictly, the show added a new element.

Instead of a second choreographed dance, the group was asked to take part in a Swingathon.

The seven remaining couples had to swing until the last and best was left dancing.

Though they were the last to perform their first dance, Harry Judd and his partner Aliona Vilani were the victors.

Harking back to the days of old school all-dancing, all-singing crooners, Strictly gave us Bruce Forsyth and Anton Du Beke.

The pair performed a duet dance and song, which was just silly enough to be very enjoyable.

Series 10 was a bumper year for stars, talent and Charlestons.

We couldn't decide which one we liked best, so these are the top three contestants flicking and kicking to the max!

Check out all the celebs taking part in this year's Strictly Come Dancing: 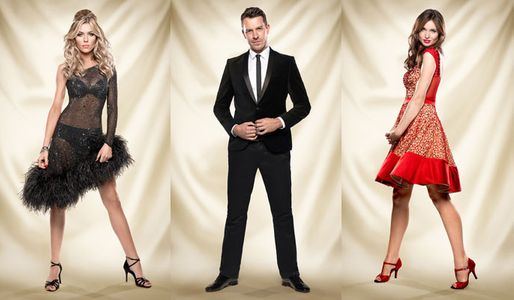 Strictly Come Dancing kicks off tonight at 6.50pm on BBC One.

by the editorial team
+
All the news about Denise Van Outen