Every celebrity that signs up to Strictly Come Dancing finds that the constant rehearsals and performances mean that the weight just falls off them. The 2013 series of SCD is no different, except that actor Mark Benton has shed a massive two stone in a mere five weeks! Well his brilliant cha-cha to MC Hammer hit U Can’t Touch This was pretty energetic…

Originally Mark Benton was dismissed as being just another fat and funny contestant on Strictly Come Dancing.

But the former Waterloo Road star has amazed the judges and the viewers at home with his in-time, entertaining and exuberant routines with his partner Iveta Lukosiute.

While he’s become a big hit on the BBC ballroom dancing show, in actual fact the weight is literally dropping off him and in just five weeks he’s lost two stone from his large frame.

Learning the tango, cha-cha and waltz has blitzed his flab, as he’s relentlessly put through his paces by twice World Ten Dance Champion Iveta.

Although it’s been hard going, Mark loves how his body is being transformed on the show.

The actor told The Sun: “I’ve lost three or four stone this year, at least two since I started Strictly. It’s wonderful.

“We must have done the cha-cha to U Can’t Touch This at least 20 times in a row. I’d say to anybody, if you want to get fit, go and dance.”

But while he’s slimmer than he has been in years, the Strictly wardrobe department is clearly struggling to keep up with his ever-changing waistline.

The 47-year-old explained: “They have to keep an eye on the costume. My gold top from week four had to be taken in because it was too big.”

But he added: “I’m not bothered about looking brilliant - I don’t mind looking daft too. If you’re doing MC Hammer, you’ve got to wear Hammer pants.”

When he was first announced as joining the show, no one took Mark seriously as a competitor, not even the man himself.

The Waterloo Road star was aware people might think of him as a joke act - like Ann Widdecombe and John Sergeant in previous series, but he finally proved himself last weekend with his beautiful waltz.

He said: “I think people were a bit shocked I could dance. I hope I can do justice to my grandad. He was a big man, twice the size of me, massive, but my mam said she used to love dancing with him as he was light on his feet.”

Mark revealed that although he’s enjoying it, spending every day mastering the dances is taking a toll on his body, admitting: “With different dances, different things hurt. I’ve had physio for my knees, acupuncture on a knee, physio on my shoulders, deep tissue work...”

Whether he goes out next week or eventually takes home that coveted Strictly Glitterball trophy, one thing’s for sure, this won’t be the end of Mark’s dancing career as he’s planning on taking up the hobby with wife once the show ends.

He said: “Sarah’s incredibly supportive and is thrilled I’m losing weight. When this is over I’m going to drag her on to the floor too.”

Do you think Mark Benton deserves to win this year’s Strictly? Tweet us @SofeminineUK! 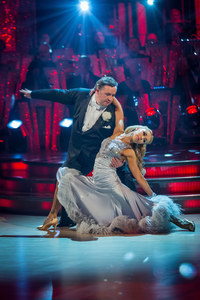