Although Susan never intended to become an actress, she has become a sensation throughout her career, and is now an inescapable icon of cult cinema. From her early role in Thelma and Louise to her formidable turn as the Evil Queen in Enchanted, check out our favourite Susan Sarandon roles...

When asked about her best memories from her career, Susan says that there are "too many," and let's face it - it's probably true. With a slew of awards (including an Oscar) and incredibly credited in over 80 films, Susan's career has definitely been an illustrious one. However, since she never expected to act she doesn't take it too seriously and tries to "have fun" on film sets.

"Sometimes you are in tune with the director and other actors. In this case, there is an amazing feeling and there are many moments that take you by surprise." She certainly hasn't failed to surprise us with her choice of roles throughout her career, ranging from the comical to drama. Here are her top 5 movie roles that will definitely stick with us... 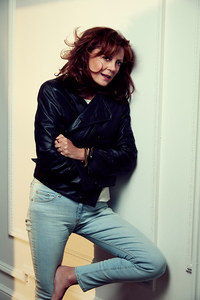 The obvious choice that sticks in our mind when thinking of Susan is her role in Thelma & Louise. Starring with Geena Davis, the comedy-drama road trip movie was a hit with the audiences despite generating controversy due to the film's violent content. That being said, the film won the Oscar for Best Original Screenplay and gave Susan her first Oscar nomination, so it's a win in our books!

A poignant film and a role that marked Susan's career saw her play Sister Helen Prejean, an American nun who accompanies a death row inmate (Sean Penn) to the end, and win the Oscar for Best Actress in 1996. What makes this film all the more incredible is that it was based on a true story. The real Sister Helen is now aged 76 and fights for the abolition of the death penalty in the United States and around the world.

Who doesn't remember Jane, the divorced redhead who, along with girlfriends Sukie and Alexandra (aka Michelle Pfeiffer and Cher) played with mysterious forces out of sheer boredom in their small town of Eastwick? Released in 1987 and signed The Witches of Eastwick was a hit and has a passionate cult following.

Susan plays a lawyer who has to find out if her client, a teenager who witnessed the suicide of a corrupt lawyer who may have told him where a murdered senator was buried. She is charged with protecting the boy against the mafia and police in a role which earned her a second Oscar nomination and a BAFTA for Best Actress.

Susan has tried her hand as the big bad villain at times, and she has never been more terrifying than as her role as the Evil Queen in Enchanted. Desperate to rid the Kingdom of her stepson and his new fiance Giselle (Amy Adam), she sends Giselle to the 'real world', eventually travelling there herself as her plans slowly go awry.

Despite her impressive filmography, the best job Susan says she's ever had is being a mother (erm, adorable.) When asked what she is most proud of, she said: "Being the mother of three to Eva , Jack and Miles. I am a grandmother now, with the arrival of my little Marlowe [Eva's daughter who was born in August 2014]. I am so proud to have accomplished this, my family is my greatest achievement."