People love to make fun of Taylor Swift. It’s probably because she’s so beautiful, talented and genuinely seems to be a sweet person. Or it could be because it’s just so easy! This year's show hosts Tina Fey and Amy Poehler couldn’t help but poke fun at the country/pop singer in response to Taylor’s not-so-subtle jibe about their behaviour at the last ceremony. Will this cat fight never end?!

Tina Fey and Amy Poehler are sort of like the mean but cool kids at school that everyone liked and no one dared mess with. Unfortunately Taylor Swift tried to mess, and so an argument could be made that she brought their response on herself.

At last year’s Golden Globe ceremony, the show hosts Amy Poehler, from Parks and Recreations, and Tina Fey, the creator of 30 Rock, made a joke about Taylor Swift’s love life, telling her to: ”stay away from Michael J. Fox’s son.” Michael laughed, the hosts laughed. Taylor, apparently, did not laugh. 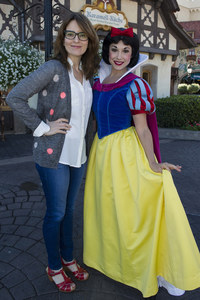 The I Knew You Were Trouble singer got her revenge when she spoke about the incident to Vanity Fair. She said: “You know, Katie Couric is one of my favorite people because she said to me she had heard a quote that she loved, that said, ‘There’s a special place in hell for women who don’t help other women.’”

Argh, Taylor. Prepare to get outwitted. When Amy was asked about Taylor’s response, she joked: “I do agree I am going to hell. But for other reasons. Mostly boring tax stuff.”

It doesn’t look like the two best friends forgot Taylor’s comment in a hurry though, as Tina Fey took a jibe at TayTay as she congratulated Amy after she won Best Actress in a TV Comedy. She said: “I just want to say congratulations again to my friend Amy Poehler! I love you and there’s a special place in hell for you.”

The We Are Never Ever Getting Back Together singer wasn’t the only person the girls poked fun at during the evening though, as they also joked about George Clooney’s choice of women, saying: “Gravity is nominated for best film. It’s the story of how George Clooney would rather float away into space and die than spend one more minute with a woman his own age”, and they commented on Leonardo DiCaprio’s love life, saying: “And now like a supermodel’s vagina, let’s all give a warm welcome to Leonardo DiCaprio”.

They also teased Julia Louis-Dreyfus from TV show Veep about her diva attitude. They said: “Well well well…look who slithered back over to the TV section. Hi Julia!”

Are you team Taylor or Team Amy and Tina? Tweet us @sofeminineUK