The Funniest Complaints About Television Shows

by Emmy Griffiths Published on 20 March 2014 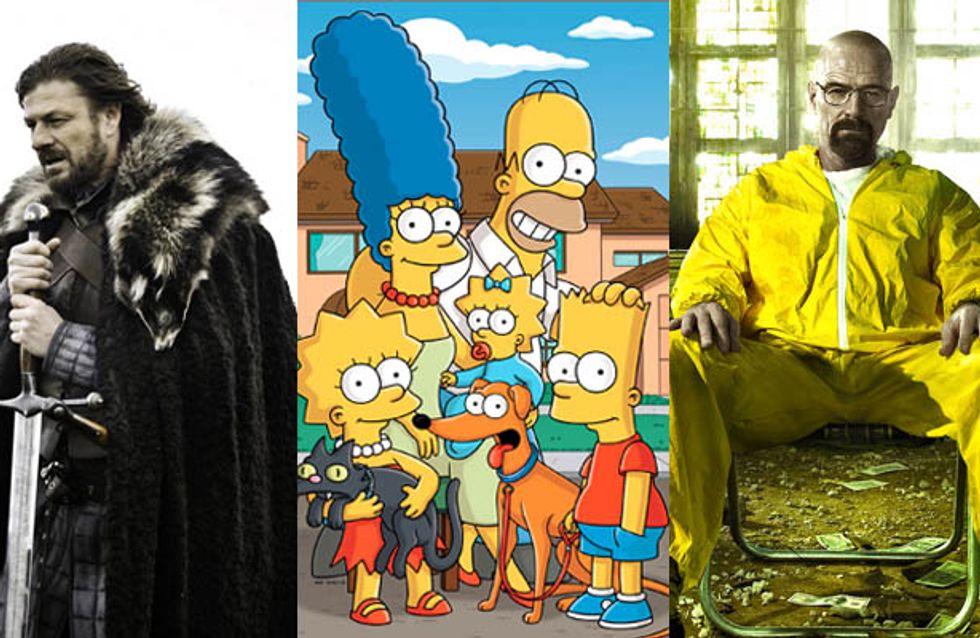 Some people out there get offended very, very easily. Add a little bit of controversial humour in the mix, and this offence turns into unparalleled, outright enragement, where the television shows are vulgar and MUST BE STOPPED! We've come up with our favourite bizarre complaints about television shows and we have to say, they're absolute gold.

The Simpsons is a satirical parody of a typical American family, and can be pretty risqué at time. Unfortunately for these viewers, a naked yellow man and a cartoon being kicked in the nuts was just too much to take!

Is it just us, or is there something utterly bizarre about describing Bart’s experience as ‘sexual agony’?!

Some people have some serious problems with the character development on Family Guy, particularly regarding Stewie. A couple of viewers complained:

“They have turned Stewie from a funny and sophisticated Enfant Terrible with some baby traits into a wimpy camp Gat man in a baby body.”

“What happened to Stewie being evil? I know we hear it a lot, but dammit, he was funnier when he was trying to kill Lois, making plans of world domination, and always seemed sinister - he's just kind of annoying now. I find it very disturbing that he's a SEXUALLY CHARGED INFANT.”

The infamous Red Wedding scene in Game of Thrones tipped many viewers over the edge, and their furious, hyperbolic complaints were pretty hilarious!

South Park is cartoon whose sole purpose is to cover any subject that is considered taboo, and so naturally it has had its fair share of outraged complaints. Our favourite is the outrage about a talking poo (poor Mr Hanky!):

“I wish to voice my disgust with the cartoon South Park that was aired…this episode depicted children ‘milking’ a male dog. I cannot believe such filth is allowed to be aired!”

“South Park shows these kids that cause and kill each other. Also on South Park, there is a (trying to put this in a nice way) excrement (aka: turd, poop) that talks. This kind of stuff should not be on Television because Television is meant for family viewing and I certainly don’t want my children watching this.”

If you watch the clip below you might wanna make a complaint too. It IS pretty sick.

Two And A Half Men

This viewer had concerns that: “Ashton Kutcher continually mock[s] an erection under his blanket”

Another viewer felt that if Two and a Half Men continued to air: “We will probably see LIVE TIME FORNICATION on prime-time programming."

“THREE DOLLS AND PUPPETS WITH NO CLOTHES ON [were used to demonstrate] A GRAPHIC SEXUAL ACT (F***ING).”

If you want to see the EXTREMELY offensive clip in question, just click on the link below…

Miley Cyrus and Robin Thicke’s performance achieved a motherload of complaints (we’re actually sort of on the complainers side with these ones, that performance was TOO much).

“Miley Cyrus demonstated lewd behaviour in her performance, indicating oral sex, dog sex, etc. It was gross and should not have been allowed on TV.”

‘She was crude, pornographic, and absolutely shameful. Had I wanted my family to see a hook perform a live sex show, I would have taken her to Tijuana.”

We really, really hope this person is joking, because if not they are basically suggested that Jamie Foxx is a threat to national security on account of his SNL opening monologue…

“Last night on Saturday night live Jamie Foxx called for the killing of all white people. This occurred during his monologue at the beginning of the show. All through his threat he used Obama’s name. I want to make a formal complaint against NBC, Saturday Night Live and Jamie Foxx. Jamie Foxx needs to be removed from society until this threat is over.”

Now most people thought that the Breaking Bad finale was flawless, but good old Britney Spears had a couple of issues. She tweeted:

“I didn’t like it (the finale) at all. I didn’t think he should have died…Maybe they’ll do another episode where the ambulance comes and revives him.”

Luckily for us, Bryan Cranston was on hand to respond:

Have you ever complained about a TV show? Tweet us @sofeminineUK