The Ultimate Game of Thrones Recap: Everything You Need To Know Before Season 4

by Emmy Griffiths Published on 28 March 2014 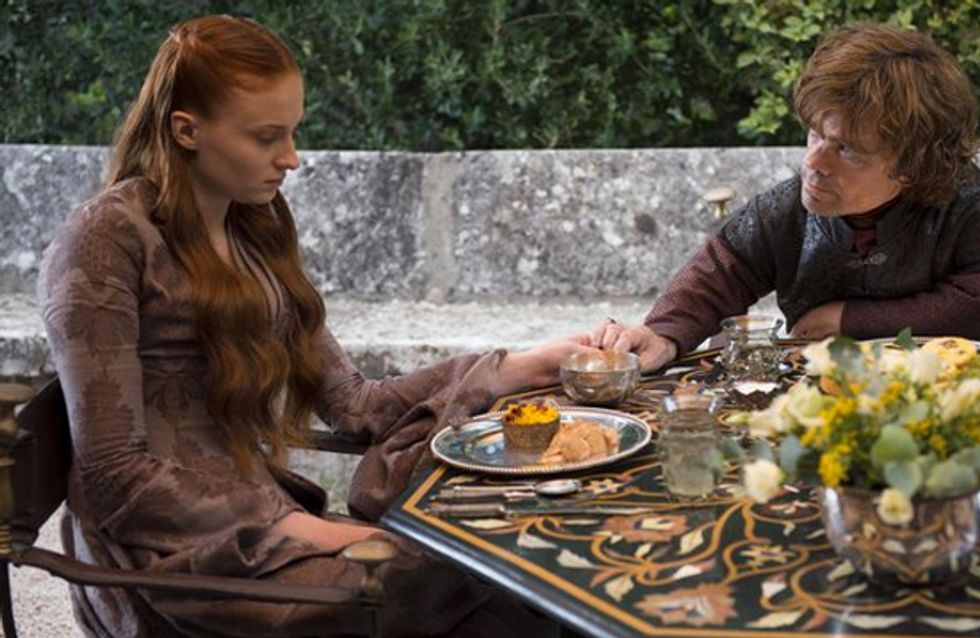 Season 4 of Game of Thrones is TEN DAYS AWAY and we don’t know about you, but since Game of Thrones has about a zillion characters spread out all over the country getting themselves into trouble, we’ve started to get a little hazy on the details of season 3. A full recap in time for season 4 is definitely in order!

Since every section of Westeros has its share share of drama, we're looking at this geographically...there is a lot of ground to cover! Starting with...

King Joffrey is due to marry Margaery Tyrell, which would unite the Baratheons, Lannisters and Tyrells and basically make them unbeatable. Ruh roh.

Cersei Lannister doesn’t especially like the arrangement, especially since it means she is losing control over her bratty incest child and knows that Margaery is simply playing the game for all it’s worth and doesn't actually love her sadistic son. Things definitely don’t look up when it’s decided that she will marry Loras Tyrell - we mean, the boy is a hottie but he's also very, very gay. Plus Cersei obviously wouldn't want to marry anyone but her twin brother. Blergh.

Tyrion Lannister is now wed to Sansa Stark. Although things were going pretty well, it looks like the death of her mother Catelyn and brother Robb has put her off her Lannister hubby for life. Sorry Tyzza. Relationships with his father Tywin have also completely broken down, mostly because Tywin told him that when he was born he wanted to drown him in the ocean. Harsh.

As for his girlfriend Shae, he's also in her bad books since Varys told her to leave and she thought he was passing on a message from Tyrion. Nothing good can come of this.

Jaime Lannister and Brienne have FINALLY gotten to King’s Landing, even though Jaime lost his hand and much of his evil nature along the way (seriously, who doesn’t LOVE Jaime now despite the fact he tried to murder a ten year old two seasons ago?) Wonder whether he and his twin sister/girlfriend will get back together? Probs.

Jon Snow spent season 3 undercover with the Wildings to uncover their plan. The Wildings have rallied to the King Beyond the Wall Mance Raydar, and they’re planning on getting to the other side to escape the White Walkers, who are growing by numbers and will basically take over the whole world if they have a chance.

Jon gets it on with a Wilding lady Ygritte and when it is discovered that he’s still a Man of the Night’s Watch, he returns to Castle Black with arrows sticking out of him, courtesy of his ex-girlfriend.

Samwell is taking care of Gilly and her baby, and has taken the pair back to Castle Black to escape the massacre that killed poor old Lord Commander Mormont, but not before he runs into Bran Stark and his crew...

Bran Stark, along with his strange company Hodor, Jojen and Meera Reed, is heading beyond the Wall since Winterfell is now being controlled by the Boltons. They’re planning on stopping the White Walkers, but we’re not too sure how. It’s something to do with the fact that he can get into the minds of animals (and dim-witted people, love you Hodor). We’re slightly dubious of the success of their mission, but hey. Good luck to ya!

Rickon Stark and Osha are heading off to safety (wherever that is), and we think this is essentially writing them out of the series until there’s some use for him again. Sorry Rickon, but have you seen how many characters there are? Just be lucky you weren’t brutally murdered like your big bro!

Stannis Baratheon and the Red Priestess Melisandre have decided at the advice of Davos Seaworth to go to The North and help out with the White Walkers, since you know, it doesn't matter if you're King is you have a unstoppable army of frozen zombies eating all of your people.

Daenerys Targaryen has what’s left of her Khalasar (miss you Drogo), her cheerful gang of sellswords led by the super sexy Daario Naharis and of course, her newly freed army of the Unsullied. She also has her dragons, which are so big now!

Basically, Daenerys is killing it, especially now she has both Jorah Mormont and the lovely Barristan Selmy on her side!

Arya and The Hound have struck up their unlikely friendship after he sort of saves her from the Red Wedding. Since Arya just witnessed her brother horribly mutilated, she’s got a little bit stabby and killed a guard showing off about the part he played in the massacre. We’re not experts, but we reckon the streak for murderous revenge will continue…

Theon Greyjoy is still Ramsay Snow’s personal pincushion who is holding him as hostage against the Greyjoys. Since Theon’s sweet old papa (jokes) Balon doesn’t fancy going to save him, so his badass sister Yara decides to march on the Dreadfort with her Ironborn crew to get him back.

Gendry was released from the creepy King’s blood sacrifice and was last seen in a little rowing boat. We’re guessing he’ll be out of the series for now, which is definitely, definitely a bad thing. Gendry’s the best piece of eye candy we’ve got now that Jaime and Jon are getting all scarred!

Littlefinger is off to the Vale of Arryn to get Lysa’s support, and we’re guessing he’ll be back to his old sneaky tricks again come season 4…

Have we missed anything out? Tweet us if you can’t wait for season 4 at @sofeminineUK and check out the trailer below!