Spice Girl turned fashion designer Victoria Beckham has given us a glimpse into her hectic life as a working mum. The super-glam star chatted to The New York Times about LA parties, being a devoted mother and why she hates the title 'Brand Beckham'.

Victoria Beckham may be part of one of the most famous families in the world, but she remains refreshingly down-to-earth.

The fashion designer, who married David Beckham in 1999, has been lifting the lid on family life.

The couple and their kids Brooklyn, 14, Romeo, 10, Cruz, eight, and two-year-old Harper, moved from LA to London at the beginning of the year.

Though we're chuffed to have the Beckhams back in the UK, it seems this ambitious 39-year-old is missing her life in the US.

She told The New York Times: "I am very career minded, and I think my personality is more suited to America. I am a working mum."

But there were some aspects of her time in LA that Victoria couldn't quite grasp - she struggles to relate to the extravagant bashes they throw in the star-studded area.

She said: "We have what I consider to be normal birthday parties.

"I’ve been to parties in L.A. that are mind-blowing. I mean, quite literally mind-blowing. People get cellphones in the party bag, that sort of thing. Fabulous, fabulous parties.

"Ours aren’t like that. They are normal kids’ parties. We’ll have a bouncy castle, a face painter."

It's a surprise Victoria has time for parties, as she's certainly a busy lady - when it comes to her hugely successful fashion label, she likes to stress that she's "involved in everything".

But it's obvious her family is the most important thing - she and David will always make the effort between them to drive the kids to school, and they certainly never miss a parents’ meeting, school play or sports event.

On paper she has what appears to be the perfect life - so why will she never smile in photos?

Victoria revealed: "I dunno. I smile in family pictures.

"When you’re in a position to be paparazzi-ed just walking down the street, you’d look a little daft if you were smiling all the time."

And you can think again if you've got a theory that Victoria thinks her smile makes her look older.

We're not surprised - Victoria looks amazing considering not only her age, but also her hectic lifestyle.

The former Spice Girl has certainly worked hard to build Brand Beckham - not that this is the label she likes to give it.

She said: "You know, we don’t look at it as a big brand. It is, but it happened very, very naturally.

Victoria added: "The most important thing is each other and the children." 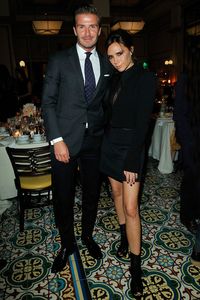