Although the Doctor Who Christmas specials are usually a bit rubbish – Titanic spaceship, anyone? - this year the episode isn’t just a one off adventure for the Doctor, instead it looks like it is going to be an integral part of the storyline that showrunner Stephen Moffat has been developing since series 5, and will hopefully tie up all the loose ends! It is also the last episode with Matt Smith – cue hysterical sobbing for Whovians everywhere – and we have the new long trailer!

If you are anything like us, you are counting down the days till the Time of the Doctor airs on Doctor Who Day, oh sorry, Christmas Day. The new trailer for BBC America looks like it will incorporate everything we know and love from Matt Smith episodes – the humour, the drama, the villains and of course, the speeches. We can’t wait!

The trailer picks up with the Doctor answering his phone in the TARDIS – we assume it’s his companion Clara (Jenna Coleman) giving him a ring, and he cheerfully answers the phone: “Hello, the TARDIS!”

He seems to be at Clara’s family Christmas dinner in the next scene, saying: “Hello the Oswalds! Merry Christmas!”

Clara’s family look less-than-impressed, and a lady that could be her grandma tells her: “I hope you make a wish.”

We know that Clara introduces him as her boyfriend, so we’re guessing that Grandma is hoping she finds a new fella, and quickly.

Things get ominous rather quickly though, as the Doctor and Clara visit a village which is rife with all our favourite villains: daleks, weeping angels, and a very strange looking woman who has a terrifying voice. The Doctor worryingly tells Clara: “Everything ends Clara, and sooner than you think.” Sniff.

We also have a Dalek tell the Doctor that he will “die in silence.” Silence as in THE Silence, perhaps? We know they will be in the episode, and we assume Clara sees them as we hear her say: “What are you? Why do I keep forgetting you?”

They also make reference to the Time War that the Doctor ended, saying: “The Time War will begin anew. The siege of Trenzalore is now begun. This world will burn.” There’s that pesky Trenzalore again, we all know that’s where the Doctor will die, but we don’t want it to happen!

As the voice-over says: “The Universe prepares to say farewell to the Eleventh Doctor.” We will never be prepared!

Although Peter Capaldi is no doubt going to cheer us up!

Are you looking forward to the episode? Tweet us @sofeminineUK 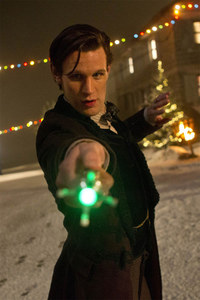