The BBC is treating us at the moment. Not only did we have the Doctor Who 50th Anniversary on Saturday night, as well as a Christmas teaser, we also had the first proper teaser trailer for season three of Sherlock. After waiting two whole years – sorry, small burst of outrage there – for season three to begin, the teaser offers very little to explain how Sherlock survived after jumping from the roof of a hospital, but is exciting all the same. For one thing, John Watson is rocki

A new teaser trailer for Sherlock has been released, and we're more than ready for season three to start right now.

As anyone who watches and loves Sherlock will know, the season two finale saw the main man, Sherlock (Benedict Cumberbatch) discredited by the media before he was forced to jump off a building to save his friends, appearing to have committed suicide after being revealed as a fake.

However, as John Watson (Martin Freeman) says thank you and goodbye at Sherlock’s tombstone, who emerges out of the shadows? Only the man himself, apparently arisen from the dead without a hint of an explanation. That was two years ago (sorry, there’s that rage again!).

The trailer begins with a figure stood in front of Sherlock’s grave – who is it?! Is it John? It it Sherlock himself? Is it the new villain, to be played by Lars Mikkelsen, or could it possibly be Jim Moriarty? Just two seconds into the trailer and we've got so many questions!

The scene then switches to Martin’s sad little face which is adorned by a magnificent moustache! We want to know more about this moustache! Is it part of an undercover disguise? Is he going through a midlife crisis? Is the moustache a new cast member?

The scene then changes, and there’s no doubting who the back of that head belongs to. Yep, it’s Empire magazine’s sexiest male movie star Benedict Cumberbatch as Sherlock, alive and well, and he has some seriously explaining to do. No wonder in the next shot John Watson looks like he’s about to punch someone. Does anyone want to place a wager that John is going to beat Sherlock to a pulp when he finds out he’s alive?

Then scene then flicks to what looks like a big group of Sherlock fans (a couple of them in deerstalkers gives the game away) as their phones buzz and hashtags of Sherlock’s resurrection flurry across the screen.

True to form “#SherlockLives” was trending on Twitter after the episode aired. Top points for Marketing, BBC! 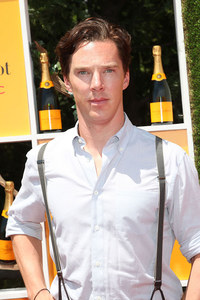