WATCH: The new Game of Thrones trailer has been released and it is amazing

Spoiler Alert! Game of Thrones. We love it, even though we really shouldn’t as it rips our hearts out and destroys everything we hold dear. The last season was particularly harrowing when the main ‘good guys’ Robb, Tulisa and Catelyn Stark, and Robb’s direwolf Grey Wind, were murdered at the infamous Red Wedding, and looking at the new trailer, we reckon we should be ready for some devastating times in season 4. Winter is coming for all of us guys. Brace yourselves.

There is less than two months together until fans of Game of Thrones lives are consumed by the award-winning fantasy series (seriously, don’t ask us out on a Monday night for two months come April 7th. We have plans.) and the new trailer is here, so let’s get analysing!

It looks like the characters are all still very much reeling from the horror of the Red Wedding of season three that saw three main characters get horrifically butchered.

Young Arya Stark is still stuck with the Hound, and recounts all the people she means to murder, listing: “Joffrey. Cersei. Tywin Lannister. The Red Woman. I can’t sleep until I say the names.”

Arya is SO badass. Meanwhile her older, much more emotional sister Sansa is haunted by the murder of her mother and brother, stating: “I lie awake all night thinking about how they died.” Yeah, getting your head chopped off then having your pet wolf’s head sewn on in it’s place can’t be a nice thought. Poor Sansa.

Meanwhile, it looks like Jon Snow is also struggling with the news, namely because since he’s been North of the Wall most of his brothers are supposed to be dead (although really it’s just Robb. Still sad though), and he says: “[Robb] was betrayed by his own men. All we can give him now is justice.”

Now, this is where we get a little worried, as almost immediately after Jon says this, Tyrion Lannister’s voiceover states: “If you want justice, you’ve come to the wrong place.”

Way to sum up the entire show. Thanks Tyrion.

Meanwhile Stannis continues to be a grouchy little so-and-so that just wants to be King, Cersei is mysteriously recounting Tyrion’s threat to her in season three when he says: “The day will come when your joy will turn to ashes in your mouth and you’ll know the debt is paid”, and Daenerys has become a Cleopatra-esque ruler Goddess as she proclaims: “I will do what Queens do. I will rule.”

We finally get a glimpse of a mysterious White Walker sort of figure at the end. Just when you had almost forgotten that those terrifying things exist. Marvellous. 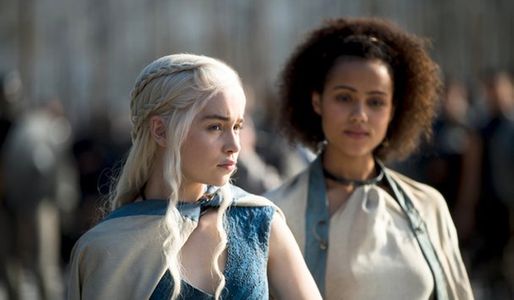