WATCH: Tom Daley has revealed he is gay in a YouTube video

Tom Daley has revealed he is in a gay relationship in a YouTube video. Shot in his bedroom, the Olympic medallist spoke about the last couple of years and the difficulties he has faced before coming out, revealing that he has been in a relationship with another man since April and is very happy. Aw Tom, we’re so happy for you, even if the women of Britain are sighing with disappointment right now!

Tom Daley has revealed that he is in a gay relationship in a YouTube video.

The 19-year-old dove into talking about his private life after sharing that he was angry at being misquoted in an unknown interview about something which he wanted to clear up.

Speaking from his bedroom, the Olympian spoke about his life for the last two years, namely about the difficulties he faced when his father tragically passed away from cancer in 2011, before talking about a new relationship which had changed his life “massively”.

He said: “in an ideal world I wouldn’t be doing this video because it shouldn’t matter, but recently I was misquoted in an interview and it made me feel really angry and frustrated and you know, emotions that I’ve never felt before when reading something about myself and, for me, honesty is something I really do believe in.”

He finally revealed that he was in a relationship with another man, admitting that he had starting seeing someone earlier in the year.

The Olympic medal-winning diver said: “Come Spring this year my life changed massively when I met someone and they made me feel so happy so safe and everything just feels great and, well, that someone is a guy.

“It did take me by surprise a little bit, it was always in the back of my head that something like that could happen but it wasn’t until spring this year that something clicked and it felt right and I was like ok and like I said, my whole world just changed right there.“ 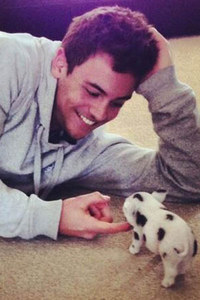 He acknowledged that he still fancied the ladies though, saying: “Of course I still fancy girls but right now I’m dating a guy and I couldn’t be happier. It really does feel right.

“People have their own opinions and I think people are going to make a big deal of this – is it a big deal? I don’t think so.”

The YouTube comments following the post this morning were full of support, with one commenter writing: “So proud of you Tom…sometimes it just takes the right person to come along. <3 Congratulations. It’s not about gender or sexuality it’s about love.”

Tom also revealed how supportive his family had been and about how he thought his dad would have reacted.

He finished off the vid telling his fans that he hoped they could support him, saying: “My friends and family are always there to support me and I hope you guys can be too.”
​
We wish you all the best Tom!

Were you surprised by the video? Tweet us @Sofeminineuk