With four kids and more money than they know what to do with, you know Christmas at the Beckhams is going to be absolutely incredible! Since Victoria Beckham has said Christmas is the only day that she really considers to be a day off – we can only imagine what she gets like when she really lets her hair down! Apparently it involves refusing to cook and getting family friend (and celebrity chef) Gordon Ramsay to do it all for them. Sounds good to us!

For most of us Christmas is a time for guzzling mulled wine, watching Christmas specials on TV and tucking into a turkey. But the Beckhams aren’t an average family, so what’s in store for the merriest day of the year?
​
It will be the first Christmas the Beckhams are spending in the UK since they’ve moved back to London, and since they’re currently renting a place in West London, apparently they’ll be chilling at Gordon Ramsay’s. 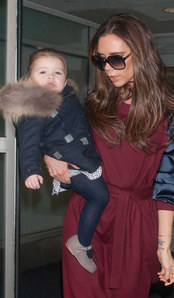 According to Heat, Gordon’s staff will be waiting on the Beckhams for the day so they won’t have to lift a finger. An insider revealed: “It will be a very traditional Gordon Ramsay Christmas. Victoria sees this as her one true day off, and because they’re going to Gordon’s she doesn’t have to do a thing.

“Vic likes to really relax at Christmas, so she isn’t even planning to dress up.”

Will the gang be kitted out in matching onesies perhaps?! They’re going to have to wear something roomy for their Ramsay dinner, regardless! The source continued: “She’ll tuck into a full Christmas roast, including potatoes and other calorific treats.

“Vic knows she can always diet in the New Year. Her drink is Champagne with orange juice.”

Gordon has also been joking about Christmas Day, and said: “We can all start playing naked Twister.”

Erm, okay?! Did anyone else just get a visual of David Beckham…never mind!

Apparently Posh isn’t into board games though, so it looks like the Beckham brood will have to find something else to do. We’re guessing the kids will be getting pretty decent Christmas presents though, so that shouldn’t be a problem!

Rumour has it picky Brooklyn just wants money, whilst Victoria is reportedly giving David clothes, DVDs and cookbooks (Gordon Ramsay cookbooks?!), whilst he’s giving her jammies – which is a Christmas tradition!

Maybe they will all end up playing with Harper’s stuff? We assume she is going to be receiving a LOT of presents.

What do you think Harper will be getting for Christmas? Tweet us @sofeminineUK