We love it when Jen reminds us all that she is incredibly fabulous and just like the rest of us at the same time. From her infamous fall at the 2013 Oscars to her self-proclaimed “armpit vaginas” at this year’s SAG Awards, J-Law makes mishaps look hilarious instead of embarrassing. Apparently, her most recent “oops” moment came when she almost walked into the men’s restroom while out partying with co-star Liam Hemsworth!

The stars of the Hunger Games series have been taking Atlanta, Georgia, by storm! Sources say that the cast of the blockbuster series love partying at a few favorite hot spots around town, and apparently Jen almost had an awkward moment while out one night.

A source told E! News that Jennifer Lawrence, sexy costar Liam Hemsworth and others from the set of upcoming films Mockingjay Part 1 and 2 decided to go out on the town this past weekend, visiting The Bookstore Pub.

The source said, “They were there Saturday night, went across to MJQ Concourse club afterwards. They’ve been there in the past, too.”

The cast and crew may have found their favorite local hangout, but JLaw got to let loose that night like an ordinary girl. Though the group was supposedly let in through the back door, the source said, “People just thought Jennifer was a cute girl, didn’t realize who she was…She was smiling and dancing.” 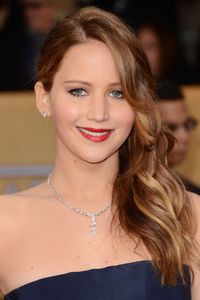 But apparently Jen lost her bearings for a minute when making a trip to the ladies room, almost finding herself in a very awkward situation.

While at the Bookstore, the source said, “Jennifer Lawrence almost walked into the men’s bathroom.” We're guessing she realized her mistake very quickly and rushed into the ladies room. Hey, it happens!

The almost-embarrassing moment did not ruin Jen’s night, though! The source said, “The crew from Hunger Games is awesome. They drank and had a good time.”