Woman Spends £15,000 To Look Like Jennifer Lawrence: 8 Fans That Took Their Celebrity Love Too Far

by Cliche Wynter Published on 2 April 2014 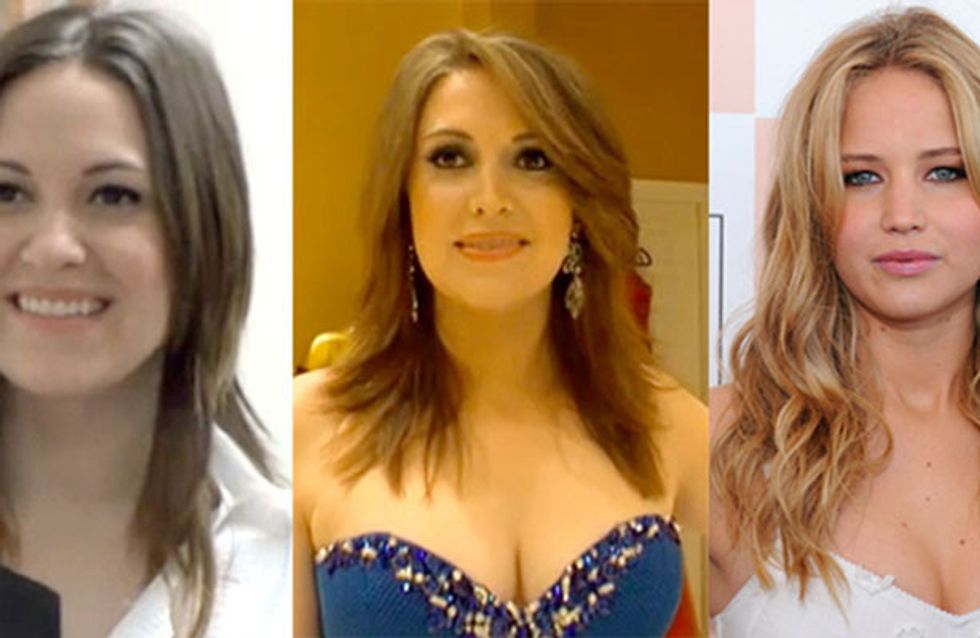 When does loving a celebrity turn into an unhealthy obsession? How about when a person spends thousands of dollars (enough to put a down payment on a home) to look like their rich and famous idol? It sounds absolutely insane. But such was the case when, Kitty, a 30-year-old mom, dropped major cash to look like Academy Award winning actress Jennifer Lawrence.

Kitty, a 30-year-old mother grabbed headlines when it was revealed she spent upwards of £15,000 on plastic surgery in hopes of looking more like Academy Award winning actress Jennifer Lawrence. Her husband wasn't fully on board with his spouse's choice to go under the knife, as he revealed, "Jennifer Lawrence isn't a celebrity that I have particularly strong feelings about one way or another." He did, however, follow up by saying the choice is ultimately hers.

If you're wondering where a mum and wife finds an extra £15,000 to splurge on elective procedures, wonder no more. Kitty says the funds came as a result of "saving from previous jobs." While this may sound wasteful to most, she begs to differ.

"It was sort of a ‘me fund’. My child’s only five and I’m still just barely 30 so I think I still feel like maybe it’s naiveté but I still have some time to rack up some money to help her when the time comes."

The irony of it all? We're pretty sure J.Law would be totally creeped out by Kitty's quest to gain her likeness. It certainly gave us the heebie-jeebies.

Sometimes fans can take their love of celebrities and turn them into unhealthy obsessions. Check out these fans who took things way too far.

First up here's Kitty before and after her six surgeries. No hang on, it's just Jennifer Lawrence. *Joking.

Toby Sheldon sought out surgical treatment for his Bieber fever. The then 33-year-old spent over £60,000 to look like the famous singer. Aside from dropping over £10,000 to get Justin's famous 'do, Toby took aquamid injections (a stronger and illegal version of botox) in his face.

Kim Kardashian better watch out, there's already a Mrs. Kanye West running around! Linda Resa had her name legally changed to the famous rapper's moniker in April of 2011. As if that weren't enough, she also had it inked across her butt.

In 2011 Junior Bradshaw and Kevin Liverpool were accused of attempting to murder singer Joss Stone. After the pair broke into her home, police were called to the residence where a samurai sword, knives, black bags, and tape were found. They also uncovered notes that spoke of decapitation, and dumping a body in a river. So messed up.

It seems like fans love to show their love for celebs via body ink. Carl McCoid, a devoted Miley Cyrus fan, got 22 tattoos all inspired by the young star. They include portraits, lyrics, and quotes from Miley. We guess once you've found a muse, you don't let it go!

Selena Gomez's stalker Thomas Brodnicki believed he and the singer were "the holy chosen ones of God". After he was picked up on a psychiatric hold, Brodnicki claimed, "he had over fifty conversations with God a day, about killing Ms. Gomez.” Oh, not like that's creepy and illegal and all...

In a statement issued to the court, he said, "I believe that a restraining order should be issued against me to prevent me from trying to contact Selena Gomez." he went on, "I do not wish to object to the restraining order against me because I know it is the only thing that will make me stay away from Selena.”

After performing on American Idol, Paula Goodspeed became obsessed with judge Paula Abdul. The idol hopeful sent the singer over a 100 letters and called her numerous times. She was later found dead outside of Abdul's home, in what appeared to be a suicide.

We all love Beyoncé, but perhaps not nearly as much as Ronald Deaver. The 31-year-old Ohio resident was arrested after stabbing his 48-year-old friend when he revealed he did not know Bey was married to Jay-Z. It's a hard knock life, for sure.

After reportedly making multiple trips to Rihanna's Los Angeles home, on October 4, 2013, Jonathan Whooper was finally confronted by security. He then allegedly stated, "Do you know who I am? I am Rihanna's future husband!" Um, scary.

We're totally creeped out now. What are your thoughts on these celeb obsessed fans? Tweet us @sofeminineUK