Former X Factor winner James Arthur is constantly being linked with new women, but it looks like a certain former soap star has caught his wandering eye – and actually held it! The Impossible singer was most recently linked to adult TV star Lori Buckby, but now he’s reportedly pursuing ex-Corrie star Helen Flanagan. Should we start calling them Jelen Arthagan or is it too soon?

James Arthur has reportedly been struck by cupid’s arrow.

It’s claimed that the former X Factor winner has fallen for I’m A Celebrity star Helen Flanagan after the pair starred on a panel show together.

Not only that, but James has admitted that the 23-year-old ex-soap star is his "dream woman" and he’s keen to get to know her better…ahem.

Even though the pair were on opposite sides of the BBC3 panel show Sweat The Small Stuff, reportedly James and Helen spent the entire time throwing each other flirty glances.

Host Nick Grimshaw said to the Middlesborough-born lad: “You told our researcher that Helen Flanagan is your dream woman, didn’t you?”

Unintentionally blushing, James admitted: “That researcher told me she wasn’t going to say anything.”

Later during the show the pair had to act out a scene as a couple, with Helen playing the dutiful housewife cooking dinner for the Sexy And I Know It singer.

An insider revealed to The Sun: “They both really got into it.

“There were lots of flirty looks throughout the show and you could sense the chemistry. During a break in filming, James was overheard asking Helen for her phone number.

“After the show she was seen going to find him in his dressing room.”

James has also been the subject of a number of kiss and tells, including one from escort Ria Vincent, who alleged that he paid her and another escort £500 each to perform a lesbian show for him.

It was also claimed by beauty therapist Danielle Withey that James invited her to his place after spotting her on Twitter – and the pair spent the night together although he cringingly kept his socks and jumper on the entire time according to Danielle.

Currently neither James or Helen have addressed the romance claims, so we’ll just have to watch this space and see if it turns into a fully-fledged show-mance.

Do you think Helen and James would make a cute couple? Tweet us @SofeminineUK! 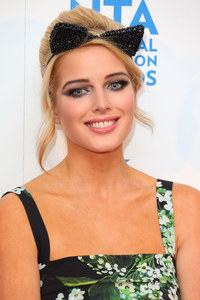