by Stephanie Ashley Published on 19 February 2014 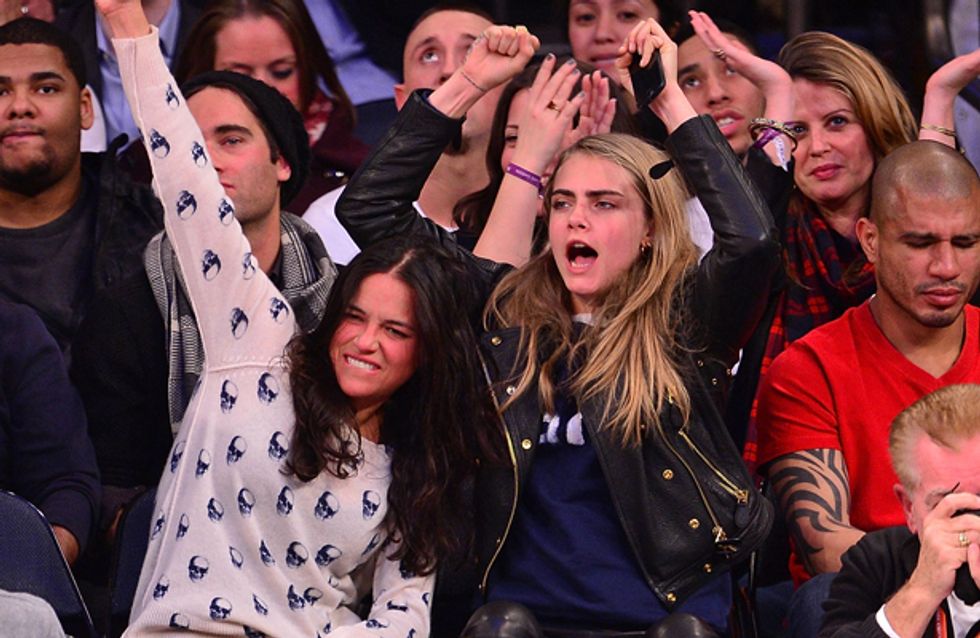 What we’ve long suspected has finally been confirmed: 35-year-old actress Michelle Rodriguez and 21-year-old model Cara Delevingne are dating! According to Michelle, the relationship is smooth sailing so far and they look forward to having even more fun together. The pair reportedly have the support of both their families, and it looks like the lady loves couldn’t be happier.

It has finally happened! Michelle Rodriguez has gone on record to say that she and Cara Delevingne are dating.

These two have had the media wondering for the past several weeks. After every new social media post about the pair’s hysterically fun exploits, fans had to wonder: are these two more than friends?

Michelle and Cara were first introduced to each other by mutual friends in America, and now reportedly split their time between California and London.

Cara Delevingne and Michelle Rodriguez cuddle up and kiss at New York Knicks game
Cara Delevingine and Michelle Rodriguez certainly weren’t afraid of a little PDA while cheerin on the New York Knicks at the home game on Tuesday. The ladies were spotted courtside cuddling up and smooching. They also seemed pretty tipsy. Are these friends getting a little too friendly?

Ever since they met, these two have been blowing up social media with their super fun antics. Relationship rumors first started when the California actress and British model were seen smooching courtside at a New York Knicks game.

Since then, they have gone on to play some serious paintball, run around London with light sabers and kiss tigers.

Michelle finally went on record yesterday when she told British magazine The Mirror that she and Cara are in fact dating.

“It’s going really well,” Michelle said. “She’s so cool. When we started hanging out I just thought she was awesome, and we have the best time together. She’s hard though. You wouldn’t want to mess with her in a fight.”

A source also told The Mirror that both Cara and Michelle’s families are on board with their relationship. Michelle was even invited to Cara’s older sister Poppy’s hen party in Los Angeles next month.

The source said, “It’s still really fresh and exciting for both of them. They’re really happy and loved-up, and spending as much time together as possible.”

“Michelle has even been invited to Poppy’s hen do in Los Angles which is a big deal,” the source continued, “and shows just how cool and accepting all Cara’s friends and family are. No one has batted an eyelid.”

The relationship may come as no surprise to those who know Michelle. She came out as bisexual back in October, when she told Entertainment Weekly, “I’ve gone both ways. I do as I please. I am too f**king curious to sit here and not try when I can. Men are intriguing. So are chicks.”

Congrats to the new happy couple!

Were you surprised by the relationship news, or did you totally see this coming? Tweet us @sofeminineUK!