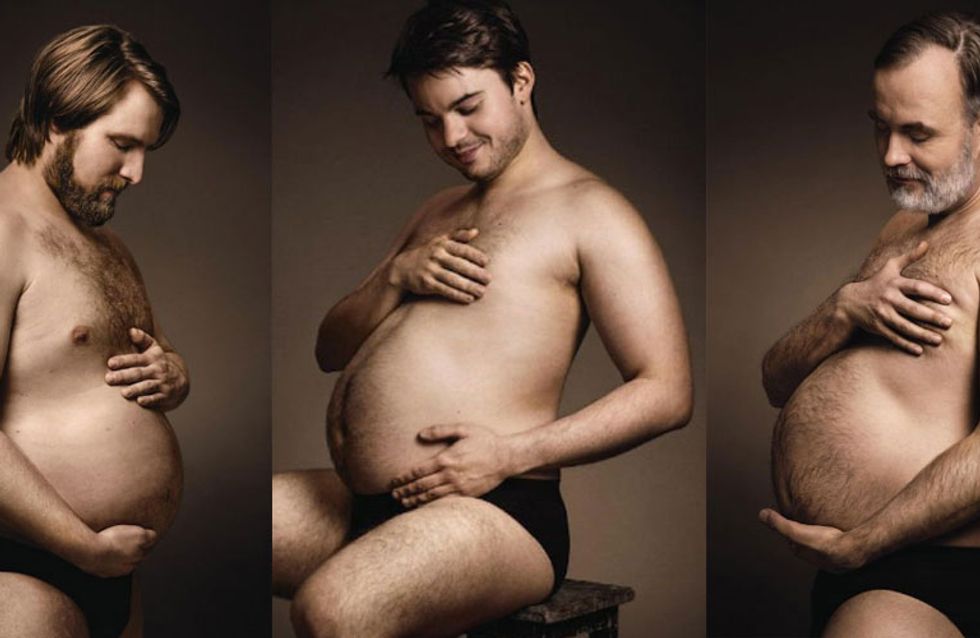 The semi-naked pregnancy photoshoot has almost become a rite of passage for expectant women in recent years but now it seems the fathers-to-be want in on the action. Men can now sleep easy as an advertising agency has devised a genius plan to involve both parents and the results are pretty spectacular, if not a little disturbing.

For most pregnant ladies, the signs of impending motherhood are blindingly obvious: the radiant glow, the infamous mood swings and not forgetting the perfectly-formed baby bump. Meanwhile, fathers-to-be simply have to announce they've got a little one on the way as they crack on in the pub still able to drink beer while their missus sits at home nursing a spontaneous bout of morning sickness.

But a German advertising agency has come up with a plan to ensure the lads don't feel left out during the nine-month slog with a creative take on the traditional baby-bump photoshoot.

Jung Von Matt has shot a group of lager-guzzling volunteers and their beloved beer bellies in what makes for slightly disturbing but no less hilarious photos for Bergedorfer Bier's latest campaign which is appropriately titled: Brewed With Love.

The amateur models play convincing pregnant men as they gently cradle their rounded tummies, gazing down adoringly at their beer-filled mid-sections. While we can't deny these pictures cracked us up, we're not convinced we'd be so amused if our other half pulled this trick.

Do you think men and their beer bellies is a photoshoot trend that'll catch on? Let us know your thoughts @soFeminineUK

The 15 Best Things About Being Pregnant

'Can I Touch Your Belly?' & 'Wow You're Getting Big': 25 Things You Should Never Say To A Pregnant Woman

This Photo Series Proves That Pregnant Is Sexy