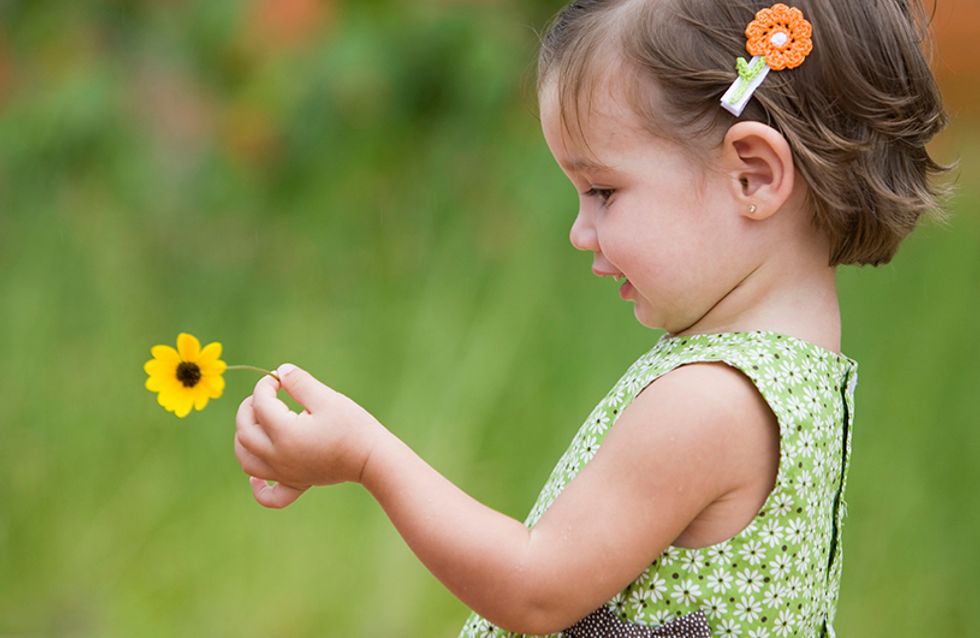 Spring is in bloom and showering us with an embarrassment of baby name riches. Whether it be blossoms or birch trees that inspire you, here are 25 names for boy and girl sprouts. These names, celebrating flowers and trees alike, provide a beautiful way to honor baby's birth season.

Arbor is lovely in both sound and meaning. Generally considered a girl's name but with unisex appeal, Arbor, meaning a shelter of vines or branches, is a pleasing combination of natural and manmade beauty. Ending with the ever-popular "er" (think Harper, Asher, and Oliver), it won't be long before Arbor starts getting the attention she (or he) deserves.

Let's hear it for Primrose Everdeen, who, if nothing else, first made us aware that Primrose was indeed an actual, usable name (sadly the same cannot be said for the vast majority of Primrose's "Hunger Games" compatriots - we're talking to you - "Peeta" and "Haymitch").

Once again, we have pop culture to thank for alerting us of Marigold's existence (although at "Downton" her roots have to be kept on the DL). Marigold, an appeasing garden favorite, is not just a flower but a color of great depth and intensity. A vibrant orange-yellow, Marigold is also immensely versatile - nicknames like Mara, Mary, and Goldie abound. We predict Marigold will be a big hit in the years to come.

While many a floral name suggest a certain delicacy, Poppy is all sass. Not all snap, crackle, and pop - saucy Poppy has a lengthy, infinitely interesting history. The red poppy flower for instance is also known as the "remembrance poppy", worn on the lapel to commemorate soldiers who died in battle. Other forms of the poppy, including the opium Poppy, have been used for, shall we say less laudatory purposes. Regardless, Poppy stole the baby name show when celeb chef Jamie Oliver named his daughter Poppy Honey Rosie (elder sister to Daisy Boo Pamela, Petal Blossom Rainbow, and Buddy Bear Maurice) in 2002 and has been winding her way up the charts ever since.

Petal - a noun ubiquitous when it comes to describing flowers - is a unique choice. No cutesy nicknames here, it's Petal or nothing. And that's just fine with us.

Dear, sweet Daisy. We used to think it was a bit too saccharine to make the leap from little girl to strong woman (the litmus test of President Daisy....Judge Daisy....left us undecided). Times have changed and with that 100 year rule, Daisy has been plucked from the garden and now resides in the nursery - right where she belongs.

Dahlia, represents, in the Victorian language of flowers, elegance and dignity. Virtuous with an air of regality, Dahlia (not to be confused with Delia) is destined to live a charmed life.

Sure, Tulip sounds a little silly - but we can't help but smile when we think of those colorful symbols of spring. One of the world's most popular flowers, Tulip with her leafy, sunny appeal, is a happy and energetic choice for any little lady.

Magnolia, star of "Showboat", southern belle, fragrant flower - and definitely riding that botany wave of popularity with plenty of vim and vigor. Nicknames include: Noa, Nola, Nolie, Maggie, and Lia, Magnolia is wonderful for nature-loving parents looking for a way to honor their love of the great outdoors while giving their girl a wearable, substantial name. You go, Magnolia!

Easy to spell and equally easy to pronounce, Clover is a winner. An obvious choice for a St. Patrick's Day wee lass, we think Clover is way more than a shamrock. From the Old English, "clafre", Clover is a symbol of wealth, good fortune, luck, and comfort, in other words a whole lot of positives.

Briony, meaning "to sprout", is a surprisingly strong plant name. Resilient and sharp - like her inspiration the wild, climbing vine with green flowers - Briony is no push-over. Independent and determined, much like the willful girl in Ian McEwan's "Atonement", Briony will prove herself to be a fierce leader.

Not a hothouse bloom like Lily, Violet, and Rose - yet, Lilac is a beautiful, unusual choice - for now. Lilac, derived from the Persian "lilak" came to us from Spanish nurseries (plant nurseries, that is) and immediately blossomed as a feast for the eyes. Commonly known for her purple hue, Lilacs can also be white, yellow, pink, or dark red. That being said: we associate Lilac with purple perfection, as does everyone else. Lilac feels like the natural evolution of popular names like Lily, but with her dual meaning she's also a member of the color wheel, along with favorites like Scarlett and Ruby. Nevermind how you discovered her, Lilac is romantic, feminine, and fabulous.

Oh right, Oren. A name that is as glaringly obvious as it is shockingly unpopular. Oren comes from the Hebrew meaning "pine tree". Soft and sensitive, Oren leads with the popular O (Owen, Otis, Otto), is a popular name in Israel, and is due to arrive here in the U.K.

Ash may seem like a short form of Asher or Ashton but in reality, short but solid Ash is a name all his own - meaning from the ash plant. Ash is one stylish syllable that exudes cool.

Meet Birch, another single syllable son. Who doesn't love the Birch tree? With it's distinguishing white-bark, this well-known tree is sturdy yet slender. Birch, who hails from the Germanic word meaning "shine" will gleam as a smart and compassionate pioneer.

A relative of Birch, Alder is the free-spirited brother to the buttoned-up WASPy Alden. Named after the flowering shrubs and trees, we see Alder's profile on the rise.

"Solid as an Oak" - Oak is mighty, steadfast, and firm. Currently used as a nickname for Oakley, Oak can surely stand on his own two.

We've reached an herb and title name. Sage is a man of many meanings, as diverse as they are desirous. The herb derives from the Latin "salvus" meaning healthy and Sage is exactly that - a delicious remedy for an array of ailments. Sage however, lives a double-life, his other meaning "wise" derived from the Latin "sapere", denoting intelligence and good judgement. Given the separate states of Sage, he'll be vigorous and precociously perceptive.

Popular in Germany, Austria, and Switzerland - Florian takes Flora and Florence and turns them on their head, by giving "Flo" to the boys. Florian means flowering and is fluffy without being overly feminine.

Ren meaning water lily or lotus, was a name previously confined to the cartoon "Ren and Stimpy". No longer. Ren will make a popular choice for today's parents, easy to roll off the tongue but rich in meaning.

Used on both boys and girls, Cedar is thankfully shifting to the all-boy aisle, away from the clutter of the "trying too hard" gender-neutrals (we're calling y'all out Wyatt, Aidan and Elliott - sorry not sorry). Cedar, the particularly aromatic tree, is a stone's throw from Cedric in the "looks like, sounds like" department, which is why we're pleasantly surprised by what a surprise Cedar is.

A second spice from the kitchen garden - Basil had the misfortune of being associated with snotty upper-crust Brits and pesto sauce. A shame since Basil has a long, long history (we're talking rulers of the Byzantine Empires here), and can be personable and dapper. We encourage everyone to take another look at Basil.

Grover confusion notwithstanding, Grove, as in a grove of trees, makes for a far more modern, nature-based alternative. Peaceful and inviting, we love Grove.

An umbrella name covering a swath of plants, Sorrel is also an orangey, chestnut brown used to describe horses. Sorrel is still pretty out there but it'll only take one celeb horse-lover to make Sorrel soar.

What nature names would you add to the list? We'd love to hear your favorites. Tweet us @sofeminineUK!

by Rachel Citron
For all the best videos, memes and shareable news!

Proud husband
by the editorial team