by Rachel Citron Published on 7 April 2015 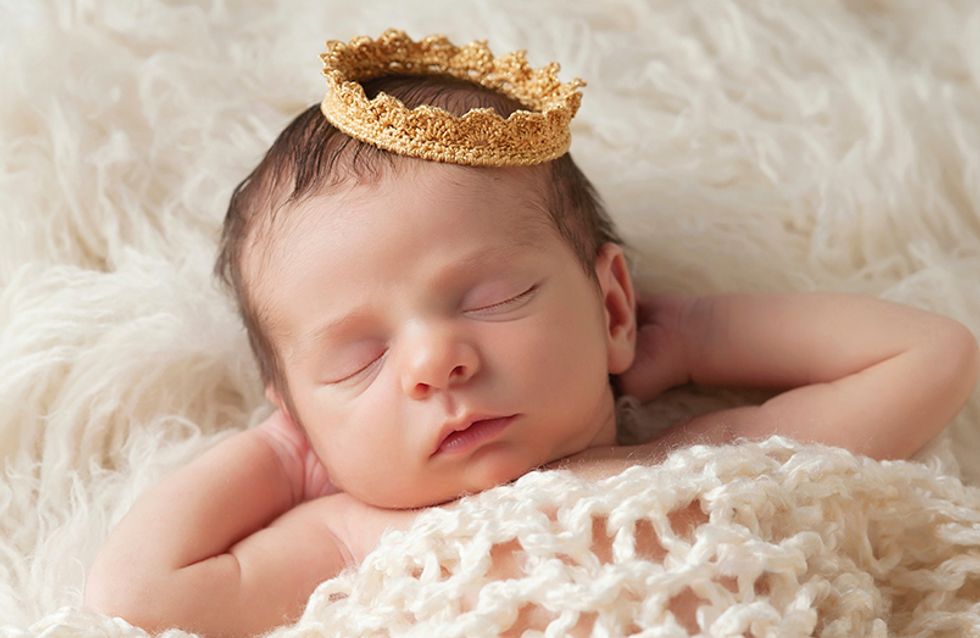 While everyone else places their bets on Alice, there are many names that you likely won't see on Kate and William's No. 2. But oh, if we did - how the ground would shake. Naming royalty has long been a spectator sport for us commoners, so we've come up with nine fantastic "outside the box" names that, with the exception of the "spare," we would love to share:

Because let's face it: That's what the kid who isn't the heir is going to be... forever. As the spare, Harry has cashed in on his "spare" status many times, his mischief given ample room to roam because he will never be taken as seriously as big brother, William. In fact, it is universally understood that this ginger rascal's antics are more amusing than appalling simply because no one cares. It doesn't matter. Barring insane, unforeseen circumstances we'll never be live streaming his coronation.

Let it Reign on this royal's parade. Reign, the name bequeathed to Kourtney Kardashian and Scott Disick's baby boy, is certainly on trend. And while Kate and William haven't exactly been known for making waves - in fact, they're working overtime to prove that they really are, just like us, Reign would be a serious statement.

A name that, like most others signaling naked ambition and impossible dreams, began right here in the US of A. Prince was once reserved for the four-legged, but thanks to Michael Jackson (Prince Michael I and Prince Michael II a.k.a. "Blanket") and other equally over-eager parents, Prince has actually cracked the top 500. Sure, a royal baby named Prince would be redundant (greetings, "Prince Prince") but let's not focus not on the repetition here but the emphasis. With a name like Prince, No. 2 will never have to endure lengthy explanations justifying his compensatory title. By sticking to that Disney-like Prince magic Prince squared will be recognised far and wide. Plus he'll have to have a hell of a sense of humour.

Tenenbaum references aside, Royal, like Prince, is another American transplant that would be quite stunning on Kate and William's prince. Parents who chose this name for their sons seem to believe that Royal has a distinctly masculine feel. The exception of course being Lil' Kim whose selection of Royal Reign for her daughter has made all the "wackiest celeb babies" lists. If nothing else: should any of the numerous aristocratic friends of Kate and William not be up to snuff in the godparent department, Wes Anderson, the creator of "Royal Tenenbaum," would do in a pinch. And with his penchant for movie sets resembling dollhouse-miniatures, he'd make a terrific interior decorator for Royal's nursery suite.

Yet one more name that doesn't hint at royal lineage, but instead makes it a declarative sentence. Not just reserved for the Queen's prized Corgi anymore... if Duke doesn't do it for the Duke and Duchess of Cambridge, there's always Earl.

Duchess, a name that says all girl and... Duchess. This name suits a princess we suppose, an occupational name that is not chosen for the way it rolls off the tongue like say Cooper or Bandit but for its sheer eventuality. Sadly the redundancy factor strikes again in this case but we love the way this name is so obvious it hurts.

Taking a page from "Teen Mom" Jenelle Evans's high school dropout notebook, we know German Kaiser would be an outrageous name for a prince. But that's just what's so fabulous about it. Globalisation being what it is today, baby name Kaiser will strike at the heart of the last bastion of Britishness, the royal family.

Ah, and we've arrived at a virtue name. Noble, meaning "aristocratic" in Latin. Noble aims to highlight all those "noble" values: morality, dignity, and knowing when to call a press conference.

A popular place name for girls, London would be sassy and undoubtedly easy to remember. As the second-born, a name that's easy to remember could be majorly appealing. And given the fact that she will be born in London and will one day wave from the balcony of London's Buckingham Palace, makes this choice...well, "out there".

What's your fave name for the new Prince or Princess? Tweet us @sofeminineUK!

by Rachel Citron
For all the best videos, memes and shareable news!